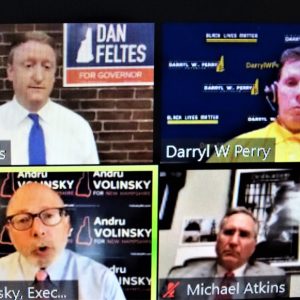 Candidates for Governor Go After Sununu, Each Other, at Nashua NAACP Forum

Two Democratic primary hopefuls and the Libertarian candidate for governor took out the boxing gloves during a virtual debate hosted by the NAACP’s Greater Nashua Area Branch on Thursday night.

The debate started with State Senate Majority Leader Democrat Dan Feltes bashing Sununu on his approach to systematic racism in the state during his opening remarks.

Darryl Perry is a lobbyist and Libertarian.

Perry said that shows him there is systemic racism in New Hampshire, and it needs to be addressed.

Perry has responded to all seven of the demands by Black Lives Matter Nashua, agreeing that implicit bias training for all state and local government employees, appointing a Civilian Oversight Board to oversee law enforcement, appointing a new Racial Equity Task Force of paid staffers, reversing the disproportionate incarcerations of minorities, supporting the prohibition of the use of tear gas and rubber bullets by law enforcement, supporting the legalization of recreational cannabis and supporting reforms of the state’s educational system to actively uproot systemic racism are all important.

Sununu has publicly stated numerous times that there is a problem with implicit bias in New Hampshire and established the Governor’s Advisory Council on Diversity and Inclusion via executive order on Dec. 14, 2017. The council works with relevant state agencies to combat discrimination while advancing diversity and inclusion.

Executive Councilor Andru Volinsky went after President Donald Trump, saying it is time to call him out for the “despicable authoritarian that he is.”

“Look, politics is about the allocation of scarce resources. Trump is a master at taking resources for his crowd and leaving crumbs for us to fight over. It’s as if there were 10 cookies on a plate, Trump took nine of them for he and his friends, and said, ‘Look out, someone is coming for your cookie,’” Volinsky said. “And that someone is always a black person, a brown person, an immigrant, a Muslim, a Jew, a gay person, a queer person.”

The candidates answered questions from participants on issues such as equality in education, the concept of federal troops coming into New Hampshire, cuts to the state budget, climate change and gun control.

Feltes and Volinsky did exchange some fire on the issue of climate change and energy.

Feltes said he wants to build a clean energy plan but does not support turning off people’s heat in the winter if the infrastructure to replace it is not yet there.

“Let’s start with talking about this natural gas business. Look, as a formal legal aid lawyer, I represented families who got their natural gas cut off during the Great Recession,” Feltes said. “I saw families heat their homes with electric ovens open in the wintertime.”

Volinsky said it was unfair for Feltes to insinuate that he would turn the heat off on people in the winter, called him a “part-time climate champion” and attacked his plan.

“You cannot put together, whatever number of pages it is, 30, 40, 50 pages and not talk about the fact that you’ve supported a fracked gas pipeline for Liberty Utilities and that you support a 20-year fracked gas contract when fracking damages the environment and the climate more than any other kind of fossil fuel,” Volinsky said.

Feltes came back and pointed out that Volinsky has not been involved with supporting any of the clean energy legislation put forward to date.

“Talk about part-time, we’ve been at the statehouse for years, hundreds of hours working on clean energy,” Feltes said. “Citizens all around this state participated. So, it’s one thing to sound off, it’s another thing to show up.”

Despite a long list of establishment endorsements and raising $1 million, Feltes is essentially tied with Volinsky going into the Sept. 8 primary with 46 percent of Democrats undecided.

Sununu has a 73 percent approval rating just 75 days before the general election, according to a new Saint Anselm Poll.