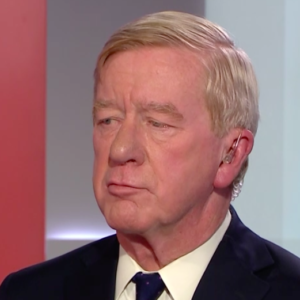 Bill Weld Makes It Official: He’s In, And He’s Not Holding Back.

Former Massachusetts Gov. Bill Weld made it official on Monday, announcing that he’s a candidate in the 2020 GOP presidential primary and ensuring that President Donald Trump will face a challenger in the New Hampshire Republican contest. Weld had previously announced the formation of an exploratory committee at a New Hampshire Institute of Politics event in February.

If Republicans were hoping Weld might run on a platform on party unity, they were disappointed. The one-time Libertarian vice presidential nominee made it clear in his announcement that he’s coming after President Trump cleats high.

“I truly believe that if we have six more years of the same stuff we’ve had out of the White House the past two years, it would be a political tragedy,” Weld told CNN’s Jake Tapper. “I fear for the republic. I would be ashamed of myself if I didn’t raise my hand and run.”

Another indicator of the bare-knuckle campaign Weld plans to run is the announcement video his campaign released today, which features the president’s infamous “Grab them by the p***y” audio, his mockery of a physically-handicapped reporter, and Trump’s comments in the wake of protests/neo-Nazi rally over Confederate monuments in Charlottesville, VA when he said “there were very fine people on both sides.”

Trump defenders dispute the characterization of Trump’s post-Charlottesville comments, but the fact that the Weld campaign included them shows they plan to run hard at the president, rather than seek accommodation with Trump supporters.  Can it work? In New Hampshire, they believe it can.

“I do. I’ve done it before,” Weld said when Tapper asked if he really believed he can beat Trump. Weld is referring to his 1990 victory in Massachusetts when he won an upset bid for the GOP nomination and then replaced Michael Dukakis as governor. Weld also said he believes he will do well in the key early state of New Hampshire.

“Gov. Weld is the perfect match for New Hampshire,” Weld campaign advisor and former NHGOP chair Jennifer Horn told NHJournal. “He’s a fiscal conservative, an independent thinker and a proven problem solver.  I’m confident that when New Hampshire voters see Gov. Weld on the campaign trail, they’re going to like what they see.

“There is no doubt that New Hampshire is in play,” Horn said.

The Weld campaign points to a March poll in which 27 percent of New Hampshire Republicans said they are already open to supporting Weld even before the campaign formally begins. And a recent UNH poll found that while 80 percent of Republicans approve of the president, just 56 percent said they planned to vote for Trump in a primary.

This puts Weld in range of the “Buchanan Benchmark,” when political commentator Pat Buchanan got 37 percent in the NHGOP primary against popular incumbent George H. W. Bush in 1992– an event seen by many as a turning point in Bush’s political fortunes.

The Granite State’s top Republican, Gov. Chris Sununu, has already said publicly that he plans to vote to re-elect President Trump, but he has appeared on stage with Gov. Weld and is not discouraging challengers from entering the race.

“I don’t think a Republican primary would hurt the president at all,” Sununu said.