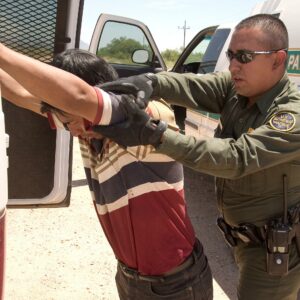 On Wednesday, the Biden administration announced it is going to stop using Title 42, a Trump-era policy that allows officials to rapidly expel migrants without chance of asylum. It has been used to stop more than 1.7 million attempts by immigrants to cross the border since March 2020.

Those numbers contributed to a record-setting level of border apprehensions during Biden’s first year in office. And now even the White House is expecting the problem to get worse.

“We are planning for multiple contingencies, and we have every expectation that when the CDC ultimately decides it’s appropriate to lift Title 42, there will be an influx of people to the border,” White House communications director Kate Bedingfield admitted to reporters Wednesday.

“Biden owes the country an explanation on how his administration plans to deal with the expected tsunami of illegal border crossers,” Jessica Vaughan with the Center for Immigration Studies told NHJournal. “Will they simply be waved in?

“Members of Congress who are responsible for overseeing border policy should be demanding briefings on these plans, and clutching those purse strings tightly until they get the right answers. Voters do not support allowing yet another one million illegal immigrants this year, with no end in sight, and those members of Congress who don’t put up a fight will rightly be viewed as enabling this disaster,” Vaughan said.

Hassan sits on the Senate Homeland Security Committee, which is tasked with oversight of border issues. Some congressional Democrats have come out strongly against ending the Title 42 policy. Arizona Sens. Mark Kelly and Kirsten Sinema wrote a letter asking Biden to maintain the policy until there is a comprehensive plan to deal with the consequences.

“I urge you to again renew this common-sense policy that has been in effect—under both Republican and Democratic administrations—since March 2020,” said Sen. Joe Manchin (D-W.V.)

Hassan, however, has been less clear. She declined to respond to NHJournal’s requests for comment on the Title 42 decision but soon after tweeted about it.

“I am concerned that there is not a sufficient plan in place to address the steep increase in border crossings that could result from this reported decision. This preemptive repeal threatens border security at a time when the administration should be focused on strengthening it,” Hassan wrote.

Immigration is a problematic issue for the first-term incumbent. Hassan has repeatedly voted against funding a border wall, and she voted against increased interior enforcement, too. She also opposed the “remain in Mexico” policy that drastically reduced illegal crossings during the Trump administration.

Not surprisingly, the Republicans vying for a chance to unseat Hassan have seized on the story.

“Maggie Hassan’s silence while Joe Biden and the Democrats rip a brand new hole in our southern border is outrageous,” said state Sen. Chuck Morse (R-Salem), who is running for the GOP nomination. “We need to get serious on securing and defending our border – the crime, drugs, and terror threats that have entered our country under Hassan’s watch are inexcusable. When I’m in the U.S Senate we’ll secure our border and put America First policies back in place.”

Retired Gen. Don Bolduc also issued a statement. “This is the equivalent of throwing gasoline on a raging fire – it will make a bad situation even worse, and is the latest in a series of misguided policy decisions by the Biden Administration that Senator Hassan has aided and abetted every step of the way. As the only candidate in this race that has stood a post and worked on the southern border with Customs and Border Patrol, I will prioritize border and national security, something Hassan has not and cannot ever do,” Bolduc said.

And former Londonderry Town Manager Kevin Smith appeared to anticipate the issue. His campaign released a statement hours before the news about the new policy broke.

“Joe Biden, with the complicity of Maggie Hassan’s silence, is about to eliminate Title 42, plunging the border crisis into unprecedented chaos. Title 42 is an invaluable border security tool that removed 52 percent of illegal immigrants in March alone, and if removed, illegal crossings would skyrocket from 7,101 each day to 18,000. It is past time for Hassan to listen to our border patrol agents and stand up to the far-left, open-borders extremists in her party,” Smith said.

Polls show Americans continue to rank border security as one of their top concerns, though well behind inflation and the economy. And voters don’t trust Biden and his fellow Democrats on the border issue. An NBC News poll taken late last year found 48 percent trusted the GOP more on the border security issue, while just 21 percent trusted Democrats.

And a February 2022 Gallup poll found 58 percent of Americans — including 55 percent of independents — are dissatisfied with the level of immigration into the U.S. today.

In the 1st Congressional District GOP primary, Gail Huff Brown announced Wednesday she had been endorsed by the National Border Patrol Council.

And in the 2nd District race, Republican businessman Jeff Cozzens told NHJournal, “Ending Title 42 is a bad idea from every possible vantage, especially when law enforcement personnel deployed on our Southern Border are already struggling with unprecedented numbers of illegal crossings. This is yet another link in the chain of stupid national security policy decisions made by the Biden administration.”

Republicans clearly believe the border security issue will help them win races for federal office in New Hampshire, something they haven’t done since 2014. If ending Title 42 policies works the way immigration experts believe, the Democrats’ political headache is likely to get worse.

EDITOR’S NOTE: A quote misattributed to Gen. Bolduc in an earlier version of this article has been corrected. NHJournal regrets the error.