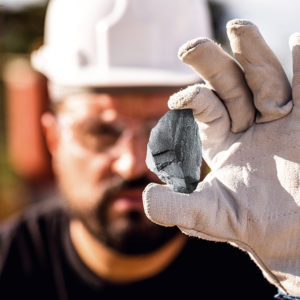 If you believe EVs are America’s transportation future, then all roads lead to… Maine?

The White House announced last week President Joe Biden will invoke the Defense Production Act to “support production and processing of minerals and materials used for large capacity batteries” as part of a plan to accelerate the creation of a domestic supply chain for electric vehicle manufacturing.

One of the key minerals for EV battery production is lithium, the chief component of lithium-ion batteries that power electric vehicles. The richest known hard rock lithium deposit in the world was recently discovered just north of Plumbago Mountain in Newry, Maine. “The deposit, thought to contain 11 million tons of ore, is valued at roughly $1.5 billion,” reports The Maine Monitor. “Measuring up to 36 feet in length, some of the lithium-bearing crystals are among the largest ever found.”

And despite Biden’s order, it is all likely to remain in the ground rather than under your hood. Why?

Because Maine’s 2017 mining laws make it all but impossible to get the permits needed to open a lithium mine.

“If President Biden wants to mine the enormous lithium deposit found in Newry, Maine, for electric vehicle batteries, he’s likely going to have to convince the environmentalists in his party who pushed this ban just five years ago,” said Nick Murray, director of public policy at the Maine Policy Institute.

Industry experts say that while Biden’s announcement is helpful, his plan included no mention of the one thing industry experts said would help the most: Fixing the process for permitting mines.

“Expanding the DPA is a very welcome and effective step. I suppose it could help the share prices of publicly traded critical minerals mining companies in the U.S, and help them raise capital, but this doesn’t effectively shrink the permitting maze domestic miners must navigate,” said Chris Berry, an energy analyst in Washington, D.C.

“The biggest impediment to building a more robust U.S. EV battery supply chain is the time it takes to build a new mine. From exploration to discovery, to mine building and commercial production can take ten years. Other pieces of the battery supply chain such as a cathode or recycling facility can be built in 36 months. For the U.S, to become adequately self-sufficient in the production of battery materials, some sort of mine permitting reform has to take place. We have the ample capital, deep and liquid capital markets, the intellectual firepower, but thus far have lacked the political will in this country to combine everything.”

Mining industry insiders say the permitting process in the United States is far longer than in other countries that also have strong environmental laws.

“Without a doubt, the most significant impediment to developing and securing a domestic supply chain for EV battery production is the time it takes to permit a mine here in the U.S. — ranging from 7 to 10 years — while our allies such as Canada and Australia, both home to environmental and safety standards similar to ours, can do it in 2-3 years,” Ashley Burke, spokeswoman for the National Mining Association, said.

“The bureaucratic inertia embedded in our current permitting system must be addressed. Obtaining the permits to build additional desperately needed processing capacity in the U.S. is likely to face similar bureaucratic hurdles.”

The White House has not given any indication that it intends to address the permitting side of the equation.

At a February event promoting domestic EV supply chain development, Biden said the administration would make sure that “tribes and the people from the community are at the table from day one, environmental protections are paramount.”

Tribes and local environmental activists have been at the forefront of efforts to block U.S. mineral mining by denying permits.

Before the Newry, Maine find Nevada was home to the largest known lithium deposit in America. Environmental groups sued last year to prevent the Nevada deposit from being mined after the project was approved by the Trump administration. Two Native American tribes later joined the lawsuit.

But the U.S. should “streamline the permitting process for mining/raw material operations” if it wants to accelerate the development of a domestic EV supply chain, Rawles said.

“This doesn’t need to and should not be at the expense of sustainability/ESG, but the permitting process for mining is costly and time-consuming and in the past has been a hindrance to getting new projects up and running for critical lithium-ion battery raw material projects.”