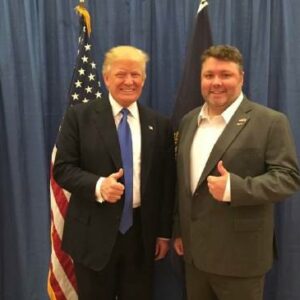 The New Hampshire Journal debate Monday night was scheduled to last 90 minutes. But it wrapped up nearly 30 minutes early, thanks in large part to the efficiency of the candidates.

After an hour, there just weren’t any political butts left for Bob Burns to kick or names to take.

Or faux pas for Keene Mayor George Hansel to commit.

Lily Tang Williams’ personal story is compelling but her ability to deliver a winning political message is somewhat limited.

All of those political truths were on display at St. Anselm College. Here are the three takeaways:

It’s Bob Burns’ World, The Other Candidates Are Just Living In It.

The premise of the NHJournal debates — our First District debate is Thursday at 6:00 p.m. — is to provide a forum where Republican primary candidates can talk to New Hampshire GOP primary voters.

Bob Burns was the one candidate on stage Monday night who clearly understood who he was talking to and had a message tailored just for them. He came out of the box hot:

“I’m the only pro-Trump, pro-life, unapologetic conservative running for the nomination in CD-2,” Burns said in his introduction. “I’m against a pathway to citizenship for illegal immigrants, I want to build the wall, and I’m an ‘America First’ candidate.”

Every answer echoed his “Trump Republican” message, from his opposition to America’s current support for Ukraine to his suggestion that even legal immigration should be restricted. He kept the other candidates on the defensive. While all three said they voted for Trump in 2020, none of Burns’ opponents challenged his claim that he is “the only person on this stage who voted for Trump in 2016.”

Given that 71 percent of Granite State Republicans have a favorable view of Trump and just 18 percent are unfavorable, Burn’s math was a no-brainer.

Burns dismissed Williams as a libertarian from Colorado who, he claimed, still has unanswered questions about her links to China. He mocked Hansel as the latest moderate Gov. Chris Sununu has sent into the political ring against him. “I’ve beaten every one of his candidates, including one already this year,” Burns said, a reference to Littleton brewery owner Jeff Cozzens.

(For the record, Hansel was the only candidate willing to commit to backing Sununu in the GOP gubernatorial primary.)

Has George Hansel Ever Met A Republican Primary Voter?

If Bob Burns was focused like an America First laser beam on talking to GOP primary voters, George Hansel appeared to be talking to anyone else. The most telling moment came when the candidates were asked to name the New Hampshire politician they admired most.

“Kelly Ayotte is a good example of someone who represented New Hampshire well,” Hansel offered.

Yes, it was that bad.

Fairly or otherwise, former Sen. Ayotte is about as popular among the GOP’s current base as Mitt Romney or Liz Cheney — two other Republicans who came to mind as Hansel answered questions during the debate. The Keene mayor added to that mojo by saying Republicans in the Second District need the kind of leadership “we haven’t seen in 10 years,” a reference to notoriously moderate Republican Charlie Bass.

How many Kelly Ayotte/Charlie Bass GOP primary voters are there?

Hansel doesn’t need to become a “Trump guy through and through,” but the debate was an opportunity to make his pitch to those voters, to give them a reason to make a pragmatic pick and back him in the primary.

Hansel’s strongest moment was one of his very last: “I’m building a coalition that can win in November. I’m the only candidate who can win in November,” he said during his final comments. Where was that message during the other 59 minutes of the debate? Why didn’t he pitch that to the primary voters?

He’s still got about 40 days to do it, but time is running out.

Lily Tang Williams may be relatively new to America, but she absolutely understands American politics, particularly on the right. Asked during the “lifestyle questions” what song we would hear if someone hit the “play” button on her music player, she immediately answered: “God Bless America.” (Her favorite movies? “Braveheart” and “The Patriot.”)

Answers like those explain why she is so popular on Fox News and Newsmax. Fleeing China and embracing American freedom is an inspiring story. But on the issues questions, Tang Williams faced two real struggles.

One was her difficulty explaining the nuance of her libertarian positions, juxtaposed against the easy-to-grasp  “America First” stances Burns offered. For all the talk of “liberty” by American politicians, libertarianism has not had much success at the ballot box.

The other struggle is for Tang Williams to simply be understood. English is her second language, and the uncomfortable truth is sometimes it was difficult to understand her answers, particularly on complex issues. It may not be fair, and it is certainly no reflection on her intellect or ideas. But it is a pragmatic consideration.

And Burns succeeded in raising questions about Tang Williams’ business practices that she will have to address. They may be nothing, easily explained away. But as the old political saying goes, “When you’re explaining, you’re losing.”

There is plenty to like about Tang Williams and both grassroots voters and members of Monday’s debate audience clearly like her.

But sending her to take on Rep. Annie Kuster? That’s a different question altogether.

The big takeaway from the NH-02 debate is how much difference it makes when a candidate has a clear mission and a clear message and isn’t worried about throwing a few elbows while making it.

He may not be the strongest candidate in the general election, but Monday Night Bob Burns showed he’s the one who wants the ball.