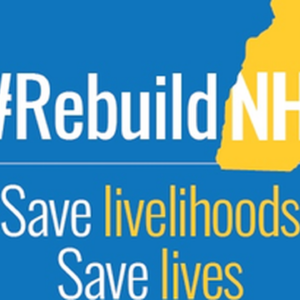 ANALYSIS: RebuildNH Struggles to Distance Itself From Protests It Inspired

When hundreds of COVID vaccine opponents mobbed state House Republican leadership at a Statehouse press conference-turned-rally a month ago, calling the vaccine “poison” and chanting “Where’s Sununu?”, leaders of the group RebuildNH were on hand to take credit for the turnout.

“The point of this press conference was to say to the people of New Hampshire we are going to fight [the federal mandate]” Rep. Melissa Blasek, executive director of RebuildNH told NHJournal. According to members of NHGOP House leadership, she was one of the people pressing the caucus to change the event from an indoor press event to an outdoor rally.

The result was a political fiasco, with televised images of anti-vaccination extremists sent across the state.

And before the infamous September 29 Executive Council meeting, shut down by protesters shouting “FEMA camps!” and claiming the vaccine was a deadly threat, Andrew Manuse, chairman of RebuildNH, sent an email to the council warning it of coming attractions. It was the invitation Manuse’s group had sent to its supporters.

“We want the Executive Council to KILL the federal DHHS grant for 13 vaccine propaganda bureaucrats. Come PROTEST with us on Wed. Sept 29 @ 7:30 AM/ Join us to OPPOSE federal DHHS money and STAND UP for medical freedom.”

Again — disaster. After Gov. Chris Sununu canceled the meeting in the face of unruly protesters, RebuildNH leadership held a hangdog press appearance on WMUR, lamely suggesting they weren’t responsible for the protest they helped organize.

“No one should be unsafe. That’s not what we’re interested in. Reopen has been very consistent over the years, or over the last two years, about having very civil protests,” J.R. Hoell, secretary-treasurer of RebuildNH said.

“Admittedly, we poorly articulated our intentions for this meeting, and will attempt to communicate better going forward,” Manuse added.

The low point came last Sunday when anti-vaccination protesters targeted House Majority Leader Jason Osborne at home. Even Manuse, whose extremism is well known (he once said he’d shoot himself rather than get vaccinated), saw the protest has gone too far.

“Regarding the protests at Majority Leader Osborne’s home, to call this action politically naive is not strong enough a rebuke. I have instructed leaders to permanently remove anyone from our groups who brings up such protests at anyone’s home, but this completely imbecilic act requires immediate rebuke of the highest level,” he said in a post on the RebuildNH website.

After multiple misguided protests, nine arrests, and weeks of bad press later, RebuildNH is now trying to rebuild its reputation, pleading with the same protesters it organized and energized to change tactics, and denying any responsibility for the chaos its cause is spreading.

RebuildNH defenders say the group isn’t at fault, pointing instead to other organizations like Absolute Defiance, which has been aligned with Rebuild in the past.

“At RebuildNH, they have three legislators, current or former, on the board. They understand how politics works,” Rep. Keith Ammon (R-New Boston) told NHJournal. “This other group, they aren’t politically savvy at all. They just want to shout.”

And yet, even RebuildNH has acknowledged some protesters used their public Telegram channel to organize the driveby protest. That is hardly surprising, given both groups have many of the same supporters.

Not to mention the same messaging. RebuildNH continues to tout false claims the COVID-19 vaccine has killed more than 15,000 Americans, and its leaders steadfastly refuse to say publicly the vaccine is either safe or effective. Even their slogan, “Save Livelihoods, Save Lives,” suggests the vaccine is a deadly threat.

RebuildNH is also pushing Absolute Defiance’s message that the protesters arrested for attempting to disrupt the October 13 Executive Council meeting are victims of “tyrant” Sununu and were arrested “without justification.”

As the Associated Press reports, the group is “calling Sununu a despot,” over the arrests “and demanding he be censured for his role in ‘this crime against the people of New Hampshire.'”

The protesters at Osborne’s house repeatedly mentioned the arrests, and Osborne’s apparent support for the actions of law enforcement, as one of their top concerns.

For Republicans, RebuildNH’s efforts have been a negative. Their over-the-top rhetoric regarding “King Sununu” and “COVID-Fascism” is off-putting to average voters. Worse, by not clearly articulating a “for the vaccine but against the mandate” position — because they can’t — they’ve put themselves and the party on the wrong side of an 80 percent issue. (About 80 percent of the voting-age population has gotten at least one shot.)

Not to mention the politically inept mobs they’ve helped organize and inspire and who they claim they can no longer control.

It’s unclear how much, if any, real political power the ReOpen/RebuildNH organization has ever had. The primary opponent who challenged “tyrant” Sununu under their banner couldn’t break into double-digits in the GOP primary. And that was before their recent spate of failures.

What is clear is that voters aren’t listening to RebuildNH. Why are elected Republicans?