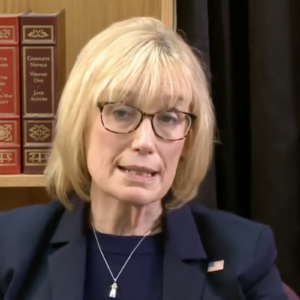 ANALYSIS: Hassan’s First Debate Performance Is All About the Base

Incumbent Maggie Hassan’s performance in the first debate of the U.S. Senate general election, hosted by the Mount Washington Valley Economic Council in Conway, was full of surprises.

She frequently pitched a campaign website, BolducFacts.com. She revealed that her favorite TV show as a child was the Cold War thriller, “The Man From U.N.C.L.E.” And she called for a massive tax hike — lifting the current cap on income workers must pay taxes on for Social Security. (Her opponent, retired Gen. Don Bolduc, backed that, too.)

But perhaps the biggest surprise was her shift in energy policy, abandoning support for more U.S. domestic oil and gas production she had embraced earlier in the year. In a sense, it was a double-reverse: Hassan spent her first five years in the Senate voting against increased domestic fossil fuel production and supporting both higher taxes on oil companies and the shutdown of energy projects like the Keystone XL pipeline.

But something happened in early 2022 — about the same time gas prices hit $5 a gallon and Democrats’ poll numbers plunged. Hassan announced a new policy that sounded a lot like Sarah Palin’s “Drill, Baby, Drill.” In February she said, “We need to push harder to increase the amount of oil, see if there’s more we could do to add to the supply side there.”

In March, she added: “I’ve been standing up to Big Oil, now more than ever, pushing them to increase supply,”

And it made sense. It was a traditional “shift to the middle” move pundits talk about all the time. And with home heating oil prices beginning to pinch and gas prices inching back up, it seems pretty sensible today.

And yet in Tuesday’s debate, there was no mention of increased U.S. production. Instead, Hassan returned to the standard Democratic boilerplate of “more green energy” and debunked accusations about Big Oil manipulating prices.

“I’ll also provide incentives for pivoting to a clean energy economy so we can finally compete with Big Oil, and stop being dependent on Big Oil,” Hassan said. In a state where about 43 percent of households use that oil to heat their homes, where is the win?

The same on abortion. All week, data have been pouring in that Democrats have hit the point of diminishing returns on their abortion attacks. And yet Hassan brought it up again and again in the debate. She stood by her “no limits” support for late-term abortion and recounted every attack made against her opponent Don Bolduc since her campaign began. She even brought up the less-than-fact-based accusation that Bolduc suggested he only wants “gentlemen” in the legislature to vote on abortion legislation.

It is true Bolduc returned the favor by offering a clumsy explanation, giving Hassan the chance to hit him again. But with abortion steadily dropping as a priority among voters — why would she?

And then there were softballs like President Joe Biden’s college debt bailout plan. After getting hit — hard — by Bolduc on her votes for $5.4 trillion in new spending, throwing Biden’s legally questionable giveaway to affluent suburbanites is a no-brainer. Instead, she embraced it.

And when she was asked point blank about Biden’s mental acuity and ability to do the job of president, she didn’t deflect. She gave him her full support.

“He is quick and sharp and capable to do the job,’ Hassan said — a position shared by about a third of independent voters according to polls. A similar number of independents support the college debt transfer.

Opposing U.S. oil and gas production, highlighting her hardcore abortion stance, embracing trillions in spending, and forcing blue-collar workers to cover the cost of some suburban kid’s Gender Studies degree? Who wants to hear that?

Actually, the only voters Hassan has been talking to since the primary: Her Democratic base.

“It’s the same reason why all three federal Democrats have pivoted to Social Security and Medicare. They know they have a base turnout problem.”

And, Moore adds, forget the public polling. It is unreliable. “Watch how the candidates are acting and reacting. They invariably have better numbers than the public polls and the message the Democrats are sending is that they are very nervous that their people won’t show up.”

Dave Carney, a longtime GOP strategist, had the same take.

“I think she has good poll numbers and they show Democrats aren’t going to turn out,” Carney said. “Six months of ‘I love abortion, and Big Oil, too’ hasn’t worked. The first message only motivates the voters she’s already got, and the second part has progressives saying, ‘Why should I vote for you? You hacks are all the same.'”

Hassan is still viewed as the odds-on favorite to win in November. But to win, she needs Democrats to turn out. She can’t rely on independent voters who are angry at Democrats over inflation, crime, and the border but decide to back her because they think Bolduc’s too extreme on abortion.

Those independents might not vote, but if they do — it definitely won’t be for her.

If Democrats stay home, the result could be the sort of 1994 or 2010 wave that sweeps out politicians like Hassan. That is what happens in wave elections. Incumbents who look safe lose because they have more support among people who answer pollsters’ phone calls than they do among the ones motivated to actually show up and vote.

Based on her debate performance, Hassan knows that could be her.