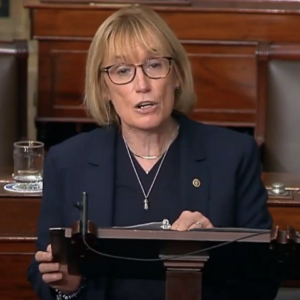 Actually, it’s not her “latest” strategy. Hassan sent a letter to the Federal Trade Commission a month ago urging the agency to “address unfair or deceptive trade practices in the oil and gas industry.” She did not mention any specific practices that are “unfair or deceptive.”

Now her lament has been turned into legislation: The Oversight to Lower Oil Prices Act.

“The administration must take action to investigate whether Big Oil is artificially raising prices and illegally manipulating the market for their own gain, and that’s what my bill will do,” Hassan said. “I am committed to standing up to Big Oil and will keeping [sic] pushing for solutions to help lower prices for Granite Staters and all Americans.”

The ‘Big Oil’ conspiracy theory is nearly as old as America’s petroleum industry itself, and Hassan’s hardly the first politician to play the ‘investigate oil companies’ card. President Joe Biden called on the FTC to look for illegal collusion last fall.

And when running for president in 2000, then-Vice President Al Gore also endorsed an FTC investigation. “It’s time to put our feet on the brakes of what may well be big oil’s price gouging,” Gore said on the campaign trail.

According to Frank Macchiarola of the American Petroleum Institute, “These requests to investigate, specifically for the FTC, go back actually 100 years, and every time we have high gas prices, some politician runs forward and says there should be an investigation about price gouging. They never bear fruit because there’s no reality to it.”

Multiple investigations have come to the same conclusion: Higher demand for oil drives up the price on the global market, which drives up the price of gasoline. It’s true that oil production still lags behind the pre-COVID-19 peak (an outcome Hassan supported for her first five years in the Senate). But as left-leaning Bloomberg News reports, that came after “a blistering four-year run that saw U.S. oil producers boost output by more than 50 percent between 2016 and 2020.”

Hassan is certainly aware the oil collusion conspiracy has been repeatedly debunked. But she may also be aware of polls showing many Americans — particularly in her party’s base — still embrace the Big Oil collusion hoax.

And it’s not the only conspiracy theory Hassan has reached for as the midterm election approaches. In December, she gave a disturbing speech from the U.S. Senate floor painting a picture of a dystopian New Hampshire Election Day on which votes are ignored and the state legislature overturns the results. “We’ll see an Election Day that is a charade – just like in countries where democracy doesn’t exist.”

She followed up a few days later with the claim that the Granite State is “sliding toward authoritarianism.”

Then again, Hassan is hurting. She continues to poll in the low 40s in head-to-head match-ups against virtually unknown GOP opponents and Biden’s approval continues to plunge. And a new analysis by Matt Yglesias’ left-leaning media outlet finds Democrats are “sleepwalking toward a Senate disaster.”

Hassan declined to respond to questions about her new legislation, including the most basic: If oil companies can cheat their way into $5 a gallon gasoline, why was it $2.85 a gallon a year ago? Why isn’t it $5 a gallon all the time?

[NOTE: Hassan has instructed the taxpayer-funded employees in her Senate press office not to respond to requests for comment from NHJournal.]

“Political pandering to primary voters never fixed broken policy,” Eberhart told NHJournal. “New Hampshire still relies on heating oil – diesel – because of the problems building pipelines to New England (thanks, New York). The good senator should look out for the best interests of her constituents and New Hampshire businesses, both of which need affordable, reliable energy supplies to prosper.”

State Rep. Michael Harrington (R-Strafford), who serves on the House Science, Technology and Energy Committee, is a former member of the New Hampshire Public Utilities Commission. He is also dismissive of Hassan’s collusion theory.

“Big government Democrats like Sen. Hassan cry the same cry every time there is a spike in oil prices: blame Big Oil,” Harrington said. “They then ‘investigate.’ only to discover there was no big oil plan to drive up prices.

“Remember, the U.S. has the largest natural gas reserves in the world. We just need big government to get out of the way so we can get it,” Harrington added.