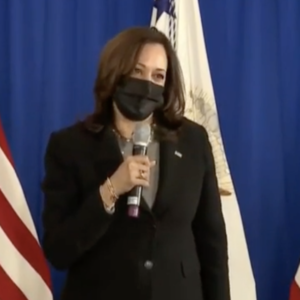 ANALYSIS: Harris Visit Reminds New Hampshire Democrats Why She Was So Easy To Forget

If you were a New Hampshire Democrat hoping to catch a glimpse of your party’s next political superstar on Friday — sorry, bad news.

All you got was Kamala Harris.

Yes, Vice President Harris may very well be the Democrats’ 2024 nominee. Indeed, given the brutal truth of the actuarial tables, the odds are pretty good she’ll be running as the incumbent.

But like her 2020 campaign for the White House, Harris’s presence in New Hampshire only succeeded in reminding voters that she’s far more impressive when she’s absent.

Harris’s visit on Friday had all the hallmarks over her first 100 days as vice president: Completely controlled, no press questions, and not a single memorable phrase or inspiring idea. During a stop at the New Hampshire Electric Co-op, for example, she talked broadly about broadband access –and the $100 billion in federal tax dollars President Joe Biden wants to dump on it — but without the soaring rhetoric of a Barack Obama or a powerful, personal anecdote like the ones Bill Clinton used so well.

At the IBEW hall in Concord, Kamala intoned the most platitudinous of platitudes (“It’s great to be in the house of labor”), but her remarks were most notable for what she left out: The price tag of the “American Jobs Plan” she came to the Granite State to promote ($2 trillion), the rationale for such a huge spending initiative, etc.

Not to mention the biggest question of all: What the heck was she doing in New Hampshire, anyway?

The White House’s decision to send Kamala to the Canadian border before she visited the one with Mexico is a faux pas that should be placed at the feet of Biden’s staff. It opened Harris and the administration up to the “Wrong Border, Kamala!” message the GOP had waiting for her when she landed in Laconia.

But a true political talent would have turned the embarrassing situation into an asset. She would have rushed to the first available media microphone and talked about her plans, her policies, her compassion for the “kids in cages” her own administration is holding right now (a record 8,500 held in March.)

Instead, Harris hid from the press. No questions. No availability. (Full disclosure: New Hampshire Journal requested press access but the VP’s office declined to respond.)

Despite her fiasco of a POTUS campaign in 2020 — the worst performance of any major candidate –Harris has to know what New Hampshire means in American politics. It’s shorthand for “Running for president.” To meander through Plymouth and Concord with nothing more to say than, “My boss is dumping billions of dollars on you” is at best a wasted opportunity. At worst, it’s a reminder to potential POTUS candidates that Harris is hardly an insurmountable candidate — even as an incumbent.

Then there’s the other “why New Hampshire?” puzzler. Harris came here to tout a wildly expensive “jobs” bill. The current unemployment rate in the Granite State? 3 percent. Ask an employer about jobs and they’ll likely respond — “Do you know someone who needs one? Please have them call me right away!”

On Thursday, Gov. Chris Sununu announced the jobs situation is so strong, the state is going to once again require people who want to collect unemployment benefits to show that they’re looking for work.  “There are tens of thousands of high-paying jobs across the state available today,” he said. And Sununu shared the experience of participating in a recent job fair where more than 100 employers offered more than 3,000 jobs, but only about 140 job seekers showed up.

Does this sound like an economy that needs $2 trillion in new government debt to get folks back to work? That needs the extended unemployment benefits Biden and Harris have been touting?

Harris’ visit to New Hampshire accomplished nothing — just like her campaign here in 2020. But she did have one nice, New Hampshire moment.

One of the speakers who welcomed Harris was New Hampshire Electric Co-op technician Jeff Bird, who was clearly extremely nervous about public speaking. Harris approached him and gave him a comforting pat on the arm. “You are the teacher to all of us,” she said.

Mr. Bird shouldn’t have been worried. His speech was as memorable as the vice president’s.