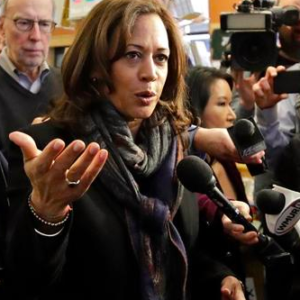 Posted to Politics December 03, 2019 by Michael Graham
Please. No more tears for Kamala Harris. Her 2020 campaign died the old-fashioned way:

When Sen. Harris stood before a cheering crowd of 20,000 supporters in Oakland and announced her candidacy last January, she became an instant contender. On paper, Harris was a such a perfect match for the political moment — she almost looked like a candidate created in a lab to win the 2020 nomination.

As a woman, she gave Hillary Clinton supporters still hurting from 2016 a chance for revenge. As a candidate of color, she could connect with the Obama coalition. As a senator from the largest —and one of the most liberal — states in the union, she had both major fundraising heft and, in theory, a head start with California’s 416 delegates. Add in her background as a prosecutor and the label “The Female Obama” awarded her by the Today Show’s Matt Lauer, and Harris was more than ready to launch.

Except… she never did.

Other than a couple of weeks over the summer with double-digit polling, Harris spent the entire campaign solidly in the second tier. Just hours before she dropped out of the race, Morning Consult released a new poll showing Harris down to 5 percent in national polling, tied with former NYC Mayor Michael Bloomberg, who’s been in the race less than two weeks. In the early states (IA/NH/NV/SC), she’s tied with her nemesis, Hawaii Rep.Tulsi Gabbard, at 4 percent.

For any candidate who’d spent millions of dollars and months campaigning, these numbers are bad. But for a nationally known U.S. senator from the biggest state in the nation who appeared in five nationally televised debates, they’re disastrous.

Harris blames her exit in part on her uber-wealthy competitors like Bloomberg and her fellow Californian Tom Steyer (who is also beating her in early-state polling). In her video announcing she was dropping out of the race, she complained,  “I’m not a billionaire. I can’t fund my own campaign. And as the campaign has gone on, it has become harder and harder to raise the money we need to compete.”

With all due respect to the senator, you know who else isn’t a billionaire? Pete Buttigieg — mayor of an Indiana city so small it would barely make a nice-sized neighborhood in Los Angeles County. And yet Mayor Pete’s raised around $50 million, enough to build a nationally competitive campaign that’s leading the RealClearPolitics polling average in both Iowa and New Hampshire.

As her “top-tier” candidacy (as she insisted pundits call it) languished, Harris began dropping hints that if she didn’t succeed, it would be the fault of the voters. She told Axios that the fact she’s a woman of color is “the elephant in the room about my campaign,” suggesting that Americans (who elected Barack Obama twice) and Democratic primary voters (who nominated Hillary Clinton) aren’t ready to support her because she’s a woman of color.

At a campaign event, Harris wondered aloud if  “America was ready for a woman and a woman of color to be president of the United States of America.”

It’s an excuse other progressives have picked up. Aimee Allison, founder of the far-Left group She the People said in a statement: “As a Black woman, I know from personal experience that Kamala has to work three times as hard as some of the other candidates in this race to get half as far.”

“But, her journey is not over,” Allison added. “If someone like Joe Biden can run for president multiple times before becoming Vice President and a leading contender for president, we have no doubt Kamala will only rise up higher.”

Other observers said Harris’s campaign was plagued by the candidate’s own missteps — from her flip-flops on Medicare For All to her uneven debate performances. Pundits also pointed to Harris’ record as a prosecutor, as well as her inability to square her aggressive enforcement action (Harris once bragged about threatening parents with jail time if their kids played hooky from school) with her campaign calls for criminal justice reform. Gabbard highlighted that dichotomy to powerful effect during a Democratic debate, and Harris’s poll numbers never recovered.

On November 1, when her Iowa polls were at 3 percent, Harris shut down her campaign offices in New Hampshire and said she was focusing her campaign on Iowa. After a month of non-stop effort, she was at 3.3 percent in the Hawkeye state. Are billionaires to blame? Is this a result of Iowa racism?

Or is Fox News liberal commentator Juan Williams onto something when he said Tuesday: “Looked at through [a] hard-eyed political lens, you might say she wasn’t a good candidate and she didn’t run a good campaign.”