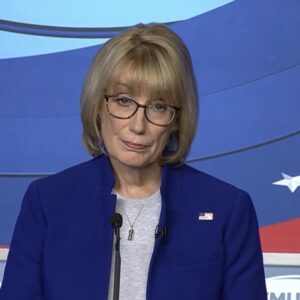 According to Woody Allen, 80 percent of life is just showing up.

After months of dodging the voters and avoiding the press, Hassan brought her “no-show” campaign to WMUR, where she was shellacked by her Republican opponent, retired Gen. Don Bolduc. From the first question about abortion to the final comments on political violence, the gaffe-prone general dominated the debate while Hassan haplessly flailed trying to find her rhetorical footing.

For the incumbent, the looming question was why voters should send you back to Washington. “Are you better off than you were two years ago?” Bolduc asked. If Hassan had an answer, she kept it to herself.

As she has done throughout the campaign, Hassan pledged she will “continue to deliver for New Hampshire.” But with the Granite State suffering under rising inflation, soaring heating costs, and concerns about crime, voters can’t be blamed for asking exactly what Hassan has delivered.

For the challenger, the question is whether he is up to the job. If Granite Staters trust him with their votes, will he embarrass them? Bolduc addressed those concerns by delivering a smart, solid performance based on a clear message: “Washington isn’t working, and Maggie Hassan is part of the problem.”

As one longtime New Hampshire political pro said afterward, “He ate her lunch. He has been out talking to real people, and she hasn’t. Tonight, it showed.”

Again and again, throughout the evening, Hassan was her own worst enemy. For most of the debate, she wore an irritated smirk, as though she felt put upon to even participate. When asked simple, direct questions she refused to answer them, spinning off into prefab attacks on Bolduc that sounded poll-tested, not passionate. Hassan’s long used this strategy — fake an answer and filibuster — and got away with it.

But Bolduc did what nobody in the media has been willing to do: he called her out. For example, when asked if she would support a federal abortion law that mirrors New Hampshire’s she declined to answer and instead repeated her unfounded claim that Bolduc supports a national abortion ban.

“Sen. Hassan, once again, hasn’t even answered the question,” Bolduc said. “That was the finest Washington, D.C. career politician non-answer I’ve ever heard.”

As she continued to dodge direct answers and Bolduc kept calling her out, her evasions became more obvious and her answers less authentic. She looked increasingly uncomfortable and unprepared.

“Why does she look so tired?” one New Hampshire political insider asked. “She doesn’t do town halls, she doesn’t do public events. She had plenty of time to rest up and prep for this debate.”

Bolduc, on the other hand, was relentless. He repeatedly linked her to Biden — whose approval rating lingers in the low 40s in New Hampshire — and the administration’s role in the current challenges of inflation, energy prices, and border chaos.

That’s the same Chuck Schumer whose super PAC has been one of the biggest Bolduc backers, spending more than $3 million to help him win the GOP primary in September. Based on Bolduc’s performance Wednesday night, that may have been an unwise investment.

While defending herself from Bolduc’s attacks on border security, Hassan became so flummoxed she was touting her teamwork with Donald Trump.

“I stood with President Trump as he signed a bill into law that gave our Border Patrol better technology when it comes to detecting fentanyl,” Hassan said, no doubt surprising many of her fellow Democrats.

By the end of the debate, Hassan looked shaken while Bolduc remained calm, cool, and collected.

Debates rarely make a difference, but because Hassan has limited herself to so few public events this one may have more impact than usual. If so, that is bad news for Hassan, who is already in a neck-and-neck race. It’s also bad for the rest of the Democratic ticket. The party has been hitting the issues of abortion and election denialism hard, a sign they’re still struggling to get their base on board. Democratic voters need a boost, but Hassan’s lackluster performance is more likely to leave them feeling demoralized.

Republicans, on the other hand, are thrilled.

“Who the hell is this Don Bolduc, and where’s he been hiding the past four years?” one conservative activist wondered.

He showed up well-prepped and with a plan. And as a result, Maggie Hassan may not be showing up on Capitol Hill much longer.