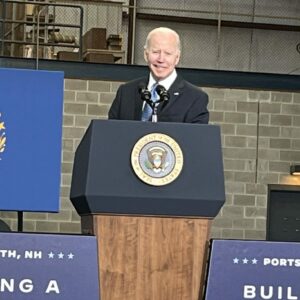 The filing period for the primary races hasn’t opened yet. Nobody knows who the Republican candidates will be in November. We don’t even have maps for the congressional districts yet. On paper, the 2022 midterms in New Hampshire haven’t even started.

But in reality, it may all be over.

“The president’s job approval during this stage is the best proxy to determine current levels of support for the party in power,” Sosnik wrote. “And that window is closing rapidly. In the last four midterm elections, by June the public had made up its mind about the leadership in Washington and how they were going to vote in November.

If it’s true that Biden’s standing today is within a few points of where he’ll be when voters cast their ballots in November, that’s very bad news for Democrats like Sen. Maggie Hassan and Rep. Chris Sununu. A new NHJournal/Praecones Analytica poll released Monday found the president’s approval is down to 40 percent approve, 57 percent disapprove– in a state he won by seven points in 2020.

The poll also found New Hampshire Republicans have a two-point edge in the generic ballot question. That may not sound like a lot, but the GOP has only won one federal election in the past decade.

And there’s another indicator of Republican strength unrolling across the country that’s likely to hit New Hampshire:

With primary elections completed in 10 states—four of which are considered 2020 swing states like New Hampshire—political consultant John Couvillon of JMC Analytics and Polling found a 32 percent increase in Republican primary turnout over the 2018 midterms. Voter turnout for Democrats decreased by three percent, according to Couvillon’s calculations.

For the May 3 Ohio primary race, Republicans turned out at twice the rate as Democrats. In the Pennsylvania U.S. Senate race, voters in the Republican primary exceeded the Democratic race by approximately 70,000.

Political scientist Henry Olsen notes voter registration is trending toward the GOP as well. His conclusion: “The primary turnout data are lagging indicators of what is plainly in front of our noses: Despite what many talking heads want to believe, the average voter right now sees the GOP as a legitimate expression of their ideals,” Olsen wrote.

GOP strategist Pat Griffin says Granite State Democrats are in a tough spot. Congressional candidates like Hassan and Pappas “don’t just have to run ahead of President Biden by a significant amount, they have to outrun their own party. And in an environment like this, that’s very hard to do.”

Hassan’s already up with TV ads, but Griffin points out Hassan and various national Democratic organizations “have been running ads to help Hassan for months, going back to when they thought [Gov. Chris] Sununu was going to run. They banged Sununu up a little bit, but did it help Hassan? No.”

The election isn’t likely to be about Hassan, anyway. Griffin agrees with the analysis that says a Venn diagram of “Hassan voters” and “Democrats” is a circle. “She’s no Jeanne Shaheen,” Griffin says. It’s about the overall political climate and Democrats have embraced policies from Afghanistan to fighting crime that most Americans don’t like.

Granite State Democrats argue that, regardless of what Sosnik says, it’s still early. And Republicans have become adept at nominating lousy candidates who are general-election losers. That’s certainly a possibility. (Then again, Democrats thought Donald Trump would be a loser in 2016, too.)

But there’s one fact that is absolutely certain about the next five months: At no point will Joe Biden get any younger.

Monday was yet another display of the president’s mental unsteadiness that has voters worried. The White House had to clean up both his impolitic claim about the U.S. defending Taiwan in the event of war and his panic-inducing (and medically suspect) statement about monkeypox.

Granite State voters have already told NHJournal they don’t believe Biden has the mental or physical acuity to handle a crisis. The Biden White House has confirmed that view by hiding Biden from media scrutiny. It’s been more than 100 days since he’s done a sit-down interview with a member of the press — a modern-day record.

As the stumbles and bumbles continue, how will Democrats like Hassan and Pappas position themselves politically vs. the president? Will they pledge to help keep the wandering octogenarian locked up in the White House?

Republicans won’t be running to apologize for Biden, or to help make sure he gets his pudding and Matlock break every afternoon. They’ll be running to beat him, to protect America from his senior moments by taking Congress out of his party’s hands.

That issue alone could be enough to flip a close race to the GOP.

There are months of history to be made before November’s election and there are still events that could impact the political climate, that could give Democrats a boost.

But that list is shrinking. And time is running out.