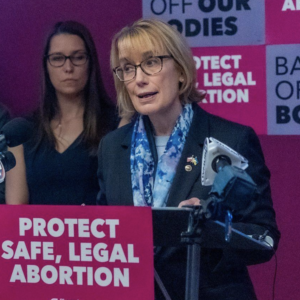 The leak of U.S. Supreme Court Justice Samuel Alito’s draft opinion appearing to show a majority on the court is ready to overturn Roe v. Wade set off a political earthquake. Three weeks later, how much has the news shaken New Hampshire politics?

Data from the latest New Hampshire Journal/Praecones Analytica poll show that while New Hampshire voters are more focused on the abortion issue, their fundamental stance — supporting abortion in the early weeks of pregnancy while opposing it in the final months — hasn’t changed.

More importantly, there has not been a shift in how Granite State voters view President Joe Biden or the Democratic Party in the wake of the Supreme Court news. Both remain relatively unpopular and appear to be headed for a setback in November.

“The abortion issue is engaging Democratic voters, no doubt, but it is not a silver bullet that will solve their midterm problems,” said pollster Jonathan Klingler.

On abortion, Granite State voters are both clear and conflicted. They overwhelmingly consider themselves pro-choice rather than pro-life (60 to 31 percent) and it came in second among a list of issues voters would like Biden and Congress to make their top priority (14 percent).

However, abortion was still far behind inflation (46 percent) and nearly tied with lower gas prices and climate change (13 percent). And in a 60 percent pro-choice sample, Republicans were still winning the generic ballot question 45 to 43.4 percent.

“A two-point Republican advantage in a state that is likely Democratic is surprising, and it’s bad news for incumbent Rep. Chris Pappas (D) in the First Congressional District,” said Spencer Kimball, director of Emerson College polling. “Even the Second District could be in play based on these numbers.”

The focus on abortion has not lifted Biden’s political boat either.

In April, Biden’s job rating in New Hampshire was 42 percent approve, 55 percent disapprove, leaving him -13 points underwater with registered voters. Today he is at 40-57 percent, or -17 points. That slippage occurred even as the abortion story dominated the news.

And while the poll found little support for a total abortion ban, voters also repeatedly rejected the stance New Hampshire Democrats have embraced of legal abortion at any time during the pregnancy without restriction.

Asked if they supported the Women’s Health Protection Act (WHPA), which “would have mandated that all 50 states allow abortion until the point of birth for any reason,” just 38.5 percent said yes while 54 percent said no.

A question about the New Hampshire abortion law that prohibits abortion at six months of pregnancy with exceptions for the mother’s life and physical health broke down fairly evenly:

However, asked in a follow-up question about their view of the six-month abortion ban, just 25 percent said they believe “abortion should be available anytime,” while 28 percent said they opposed the law because “six months is too late in a pregnancy.” [emphasis added]

“The federal Women’s Health Protection Act is opposed by most Granite Staters and does not even break 50% support among Democrats—but our entire federal delegation rabidly supported it,” McGinley said.

On two specific elements included in the WHPA, voters were very clear. They oppose allowing minors to have an abortion without their parents’ knowledge (56-34 percent), and they overwhelmingly oppose legal abortion for the purposes of picking the sex of a child (75-10 percent).

All four members of the New Hampshire federal delegation voted for the WHPA, which blocked states from having parental notification laws or banning abortion for sex selection.

Many Republican strategists believe the abortion issue is a loser for their party, and that is particularly true in New Hampshire, one of the most pro-choice states in the country. They tell NHJournal on background they believe the more the issue is in play, the more it drives up voter turnout among Democrats — particularly younger suburban women.

“Pro-lifers are going to vote no matter what. They’re churchgoers — showing up to stand in line is what they do,” one local GOP strategist told NHJournal. “If the Supreme Court overturns Roe, that’s going to bring more Democratic women to the polls.”

Klingler, however, believes the macro-political environment is still trending away from Democrats.

“Independent voters continue to disapprove of President Biden’s performance at high levels and prioritize kitchen table issues over other matters,” Klinger said. And he notes that while independent voters are overwhelmingly pro-choice, “they hold complex positions on abortion that may not clearly benefit Democrats.

“The existing New Hampshire abortion law is supported by a plurality of Granite State independents, suggesting the overturn of Roe could create a new status quo these critical voters may not wish to reverse.”

Perhaps the most succinct take on Granite Staters’ views on abortion is found in the “bumper sticker” question:

Ms. Kristen Day, Executive Director of Democrats for Life America says these results are a warning to members of her own party.

“Every Democrat who wants to win should take notice that the voters of New Hampshire reject pro-abortion extremism,” Day said. “If Senator Maggie Hassan would like to win her first re-election campaign, she should not be fooled into catering to the small, vocal minority that is enthusiastically pro-abortion.

She should stick with the mainstream of the populace who want abortion to be ‘safe, legal, and rare,’ and who support New Hampshire’s current abortion regulations, or even want them strengthened.”