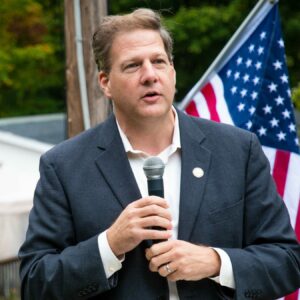 A Sununu v. Hassan Race Would Be a $100M Contest, Experts Say

While Gov. Chris Sununu continues to keep Republicans guessing about his future, Granite State political observers say if he gets in the U.S. Senate race next year, it would turn the contest into a $100 million showdown.

Sununu is considering a run against incumbent Democrat Maggie Hassan, who has served in Washington, D.C. since 2017.

Sununu says he has not yet decided if he will challenge Hassan, who was the state’s governor from 2013 to 2017.

Sununu raised eyebrows about a potential announcement after he traveled to Kentucky in August, the home state of Senate Minority Leader Mitch McConnell.

On Aug. 30, Sununu said he was visiting health care officials with Lori Shibinette, who is the commissioner for the NH Department of Health and Human Services.

“Like New Hampshire, Kentucky is a rural state with small cities. Seeing how they are handling their COVID surge, how hospitals are managing through this crisis, and to hear what tools they have found to be effective in battling this most recent wave will help inform New Hampshire’s approach,” Sununu wrote in a thread on his Twitter account.

In September, just three weeks after Sununu was admitted to Portsmouth Regional Hospital with a bleeding ulcer that required a blood transfusion, he spoke to the California Republican Party’s Fall 2021 Convention.

When asked about what he was doing in California during a COVID-19 press conference on Sept. 29, Sununu said he met with a couple of businesses while he was out west, including some that might consider expanding into New Hampshire.

“But then I also spoke at a convention, and it was a political convention, not for me or anything. But it was just about, in California, they’d just come through their recall election. And I just spent some time talking about the opportunities, right? The opportunities to always, if you want to win an election or have a viable message, or you really want a different change in your state or your community. And that message was quite simple: be genuine,” Sununu said.

So, what does a race between Sununu and Hassan mean for money coming into the state in the form of political advertising?

Dean Spiliotes is a civic scholar at Southern New Hampshire University and the founder of NH Political Capital. He told Inside Sources he projects over $100 million will be spent on the U.S. Senate race in New Hampshire if Sununu runs.

“The profile is raised significantly by the fact that this would be a sitting governor deciding not to run for re-election as governor but to instead run for Senate. He’s been heavily recruited by the Republican National Committee, the national party wants him to run for this potential pick up,” Spiliotes said. “He would make it a very competitive race.”

Dante Scala, associate professor of political science at the University of New Hampshire, said he agrees with the Spiliotes’ numbers because there is money already being spent by groups outside of the candidates themselves.

Scala said millions of dollars are needed to gain a presence in the Boston television market, which is expensive. Many people who live in southern New Hampshire work in Massachusetts and watch Boston news.

Scala said in today’s climate, candidates typically plan to go to New York, Texas, and California to get acquainted with potential donors because that is where the money is.

Scala said sometimes, and maybe in this instance, a politician’s actions are telling to those who follow politics closely.

“When you’re traveling, that speaks more than words do,” Scala said. “You don’t do it without a reason.”

“I’m a third-term governor. I get a lot of invitations,” Sununu said. “I’m just trying to help good organizations and good candidates.”

That includes former Maine Gov. Paul LePage, who is seeking to return to the top job in Augusta. Sununu’s appearing at an event for him as well.

“I used to work with Gov. LePage. He is a friend and he sees the success we’ve had. He wants to copy that success in Maine,” Sununu. “I think he’s going to be very successful in 2022.”