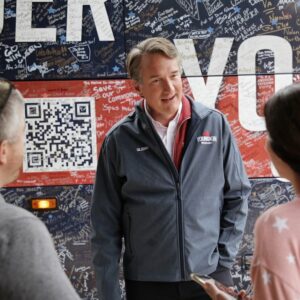 Virginia’s newly elected Republican Gov. Glenn Younkin is borrowing a page from New Hampshire by setting up an email tipline for parents to report on teachers who use Critical Race Theory (CRT) curriculum in the classroom.

Youngkin, who won an upset victory for governor in a state Joe Biden carried by 10 points a year earlier, campaigned hard against the use of CRT in Virginia classrooms. On his first day in office, he signed an executive order banning “divisive concepts” like CRT from the state’s classrooms.

“We’re asking for folks to send us reports and observations that they have that will help us be aware of things like ‘privilege bingo,’ be aware of their child being denied their rights that parents have in Virginia. And we’re going to make sure we catalog it all,” Youngkin said. “This gives us a great insight into what’s happening at a school level, and that gives us further ability to make sure we’re rooting it out.”

“Privilege bingo” is an actual classroom exercise used as part of a CRT-based curriculum to highlight racial differences among students and label certain children “privileged” based on race, regardless of their actual circumstances. The Fairfax County, Va. public school system apologized for using it after parents found out about the classroom exercise and complained.

Youngkin’s moves mimic those taken by the New Hampshire Department of Education. Last fall, Commissioner Frank Edelblut set up a website that allows Granite State parents to report violations of the state’s new anti-discrimination law. New Hampshire did not directly ban the teaching of any specific concept but instead banned teaching that any group was superior or inferior based on race, creed, or sexual orientation.

“This website in support of the commission provides parents with an online site to address concerns that their child may have been discriminated against,” the DOE said in a statement when the site was launched. “Parents, guardians, and teachers are able to submit a public education intake questionnaire that will be reviewed by a [state Human Rights] commission intake coordinator to determine if there are grounds to file a formal complaint.”

Edleblut did not respond to a request for comment on Tuesday, but his staff indicated that any complaints filed through the website would go directly to the state’s Human Rights Commission (HRC). Edleblut has said that by going to the HRC, the due process rights of any teacher accused of violating the law will be protected.

Ahni Malachi, the commission’s executive director, refused to say Tuesday how many cases, if any, had been referred to her office since the website was published. She did say that no cases have been fully adjudicated at this time. But it is not clear if there are any cases pending before the commission, are still in the investigative stage, or are heading for mediation. The commission’s website lacks transparent information on the number of cases handled, and there is no public data available on the website beyond 2018 numbers.

NHJournal has reported on multiple Granite State school systems, including Manchester, Laconia, and Litchfield, that were found to be using CRT-inspired content.

New Hampshire’s anti-discrimination reporting system caught flak from teachers unions after it was learned a group of activists, Moms For Liberty, was offering a $500 bounty for the first verified report made to the commission. While Edleblut distanced himself from the bounty scheme, the heads of New Hampshire’s two teachers unions accused him of engaging in dangerous vigilantism.

“Totally innocent teachers could lose their teaching license over claims that are not backed up by any evidence. Edelblut has declared a war on teachers, a war that the overwhelming majority of New Hampshire parents will find repulsive,” AFT-New Hampshire President Deb Howes said.

“Politicians like Commissioner Edelblut are using the dog whistle strategy of distraction, division, and intimidation in their efforts to dictate what teachers say and block kids from learning our shared stories of confronting injustice to build a more perfect union,” Tuttle said.

To date, no bounty has been paid, according to Moms For Liberty. Both the AFT and NEA have since filed independent federal lawsuits against the state over the anti-discrimination law.

The lawsuits incorrectly describe the law as banning the teaching of “divisive concepts.”