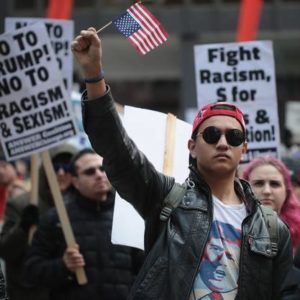 Young NH Voters Hate Trump. Could They Also Save His Candidacy?

They overwhelmingly want Donald Trump thrown out of office. Most of them want to trash the Electoral College and have no problem with wiping out the entire private health insurance system. And a whopping 60 percent support the government confiscating your guns against your will.

They’re the young Democrats of 2019, and they are ready to roar.

The Institute of Politics (IOP) at Harvard Kennedy School has been polling 18 to 29-year-old Americans on their views of politics and public policy since 2000 and the new data released Monday show these voters have never been more extreme in their views, or more able to impact the outcome of our elections.

“At this point in the campaign cycle, the combination of factors in our poll found the highest level of enthusiasm and engagement among young voters we’ve ever tracked,” John Della Volpe, Director of Polling at the Institute of Politics, told NHJournal. “And that’s coming off the historic levels at this point in the 2016 cycle.”

That year Hillary Clinton got 55 percent of the under-30 vote, about 10 points lower than Barack Obama’s performance. But Trump’s number was even worse at 29 percent. As for 2020, only a third of young voters will even consider supporting President Trump, while 59 percent say they are absolutely certain they won’t. And though young people continue to vote less often than their senior counterparts (only 46 percent of voters under 30 turned out in 2016, compared with 71 percent of those 65 and older), they’re the only age group whose turnout was higher in 2016 than 2012. Della Volpe expects that trend to continue next year.

And that means still more bad news for the GOP. The same day the IOP released their data showing young voters are ready to take out Trump, the progressive activists at NextGen America announced plans to spend $45 million on “the largest youth organizing campaign in American history ahead of the 2020 presidential election.”

“Across 11 states, NextGen America will register, engage, and mobilize young voters (ages 18-35) to remove Donald Trump from the White House, flip the Senate, and elect progressives up and down the ballot,” NextGen said in a statement. Among the 11 are New Hampshire and Maine, two New England states where Donald Trump significantly outperformed previous Republican presidential candidates. (Trump lost New Hampshire by just 2,700 votes and he picked up an Electoral College vote by winning Maine’s second congressional district.)

“Yet again, it’s going to come down to young Americans to save the country,” said NextGen America Executive Director Ben Wessel.” We absolutely cannot afford to lose this year.”

NextGen’s New Hampshire State Director Brian Rogers made an even bolder prediction: “We are going to organize night and day for the next 11 months to ensure that every eligible college voter in New Hampshire gets to the polls and votes in the ‘First in the Nation’ primary, as well as the general election next November,” he told NHJournal. “We know that young people do not feel represented by Trump or Gov. Chris Sununu. We also know that Millennials and Gen Z’s make up the largest voting block in American history. When young people show up to the polls, we win.

“We plan on showing up in record-breaking numbers to kick Trump and Sununu out of office and defend Jeanne Shaheen’s senate seat,” Rogers said.

Team Trump isn’t worried. “The polls are getting it wrong again,” RNC spokesperson Nina McLaughlin told NHJournal. “Go to any Trump event, you see young people, you see a diverse crowd. Plus, the Trump 2020 ground game is unparalleled. We have the infrastructure, we have the income and we’re already outworking the Left.”

There’s also a potential unintended consequence that could work in Trump’s favor. These younger voters are extremely progressive and they’re disproportionately supporting far-Left candidates in the Democratic presidential primary. As a result, they could help nominate a general election candidate who would struggle against the incumbent president.

For example, 28 percent of likely Democratic primary voters under age 30 support socialist Bernie Sanders in the new IOP poll, while another 22 percent support Elizabeth Warren. That means half of these young–and highly motivated–voters support two of the most progressive candidates in the race. Another six percent support tech entrepreneur Andrew Yang and three percent back Kamala Harris. Only 16 percent–one in six–support more moderate frontrunner Joe Biden.

These voters will make up around 30 percent of the Democratic primary electorate, which makes them a potent force. Add the fact that New Hampshire has the highest percentage of college students per capita, and young voters could have an outsized impact on the 2020 nomination process. According to NextGen, “voters under the age of 40 years old grew their share of the [New Hampshire] electorate from 10 percent in 2014 to 14 percent in 2018, ultimately helping dictate the outcome of crucial elections up and down the ballot.”

The IOP data show the most motivated young voters are also the most politically progressive. For example, while 41 percent of all Democrats under 30 support a mandatory gun confiscation program, that number rises to 44 percent among those Democrats most likely to vote in the general election, and 60 percent among likely primary voters. The trend is similar on the issues of dismantling the Electoral College (40/48/63 percent) and ending all private health insurance (38/42/57 percent).

If they push a Warren or Sanders over the top in a large and divided Democratic field, they could inadvertently deliver the very sort of far-Left, Green New Deal, Medicare For All candidate Donald Trump’s hoping to run against.