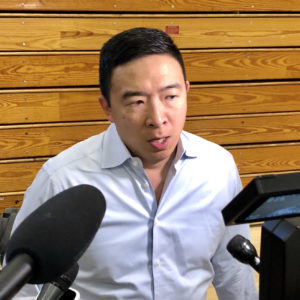 Democratic POTUS candidate Andrew Yang talks to the press during a campaign stop at Concord High School in New Hampshire on January 2 2020.
News

“If you’re here in New Hampshire, you know this is the center of the political world, right? And so it’d be very natural for our college students here to say, ‘Hey, I’d like to have my voice heard,'” Yang told NHJournal. “And if you make it harder for them, then you’re sending the wrong message.”

Yang says he opposes New Hampshire’s recently passed voting regulations that require people to be legal residents — as opposed to merely temporarily domiciled here — if they want to vote in the state’s elections. “New Hampshire should be making it easier and not harder for [out-of-state] college students to vote.”

New Hampshire has the highest percentage of college students per capita in the country, and progressive campus groups have publicly bragged about their ability to mobilize these students — many legal residents of other states — to sway elections in the past. For example, the campus group NextGen America (founded by 2020 contender Tom Steyer) says they increased turnout in their targeted college precincts in 2016 by more than the margin of victory for Democrat Maggie Hassan over incumbent Republican Sen. Kelly Ayotte.

Given that Trump lost New Hampshire that year by less than 3,000 votes, some New Hampshire residents don’t want the state’s Electoral College votes to be controlled by temporary residents of the Granite State. There are also complaints by long-term residents about the impact of these out-of-state student voters on local elections, too.

Yang rejects these criticisms. “I would argue that the local New Hampshire voters are helped, not hurt, by having more people participate in the process here. It doesn’t dilute their votes. It’s the opposite. If you have young people in the state excited about the candidates, then they’ll spread the word through social media and other means. These are all very positive things.” 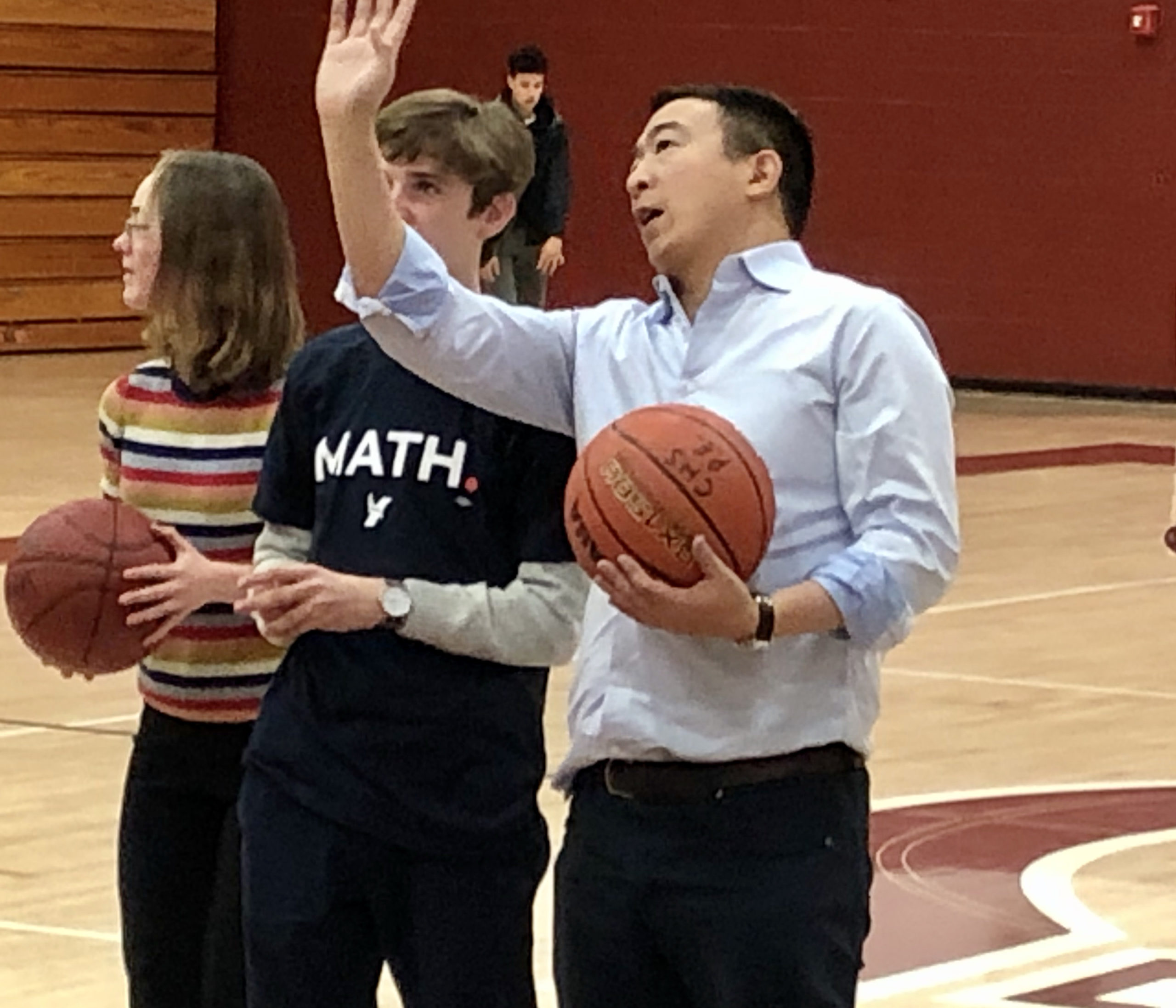 Yang made his comments at a campaign stop in Concord, NH, on Thursday, after shooting hoops with Concord High students as part of a campaign tour across the Granite State. In addition to lower residency standards in New Hampshire, Yang touted his support for allowing 16-year-olds to vote.

“We have 16-year-olds paying taxes,” Yang said. “And it’s only fair that they should know where their taxes are going. And studies have shown that when you vote young, you’re more likely to become a lifelong voter, which we should be encouraging. Right now, high school students look at our politics and don’t feel that it’s relevant to them in part because they can’t participate.

“So if you had the voting age at 16, you would have every high school in the country actually engage with our democracy. And that’d be positive,” Yang said.

Yang isn’t the only Democrat who feels this way. “I myself have always been for lowering the voting age to 16…I think it’s really important to capture kids when they’re in high school,” Speaker Nancy Pelosi said last year. 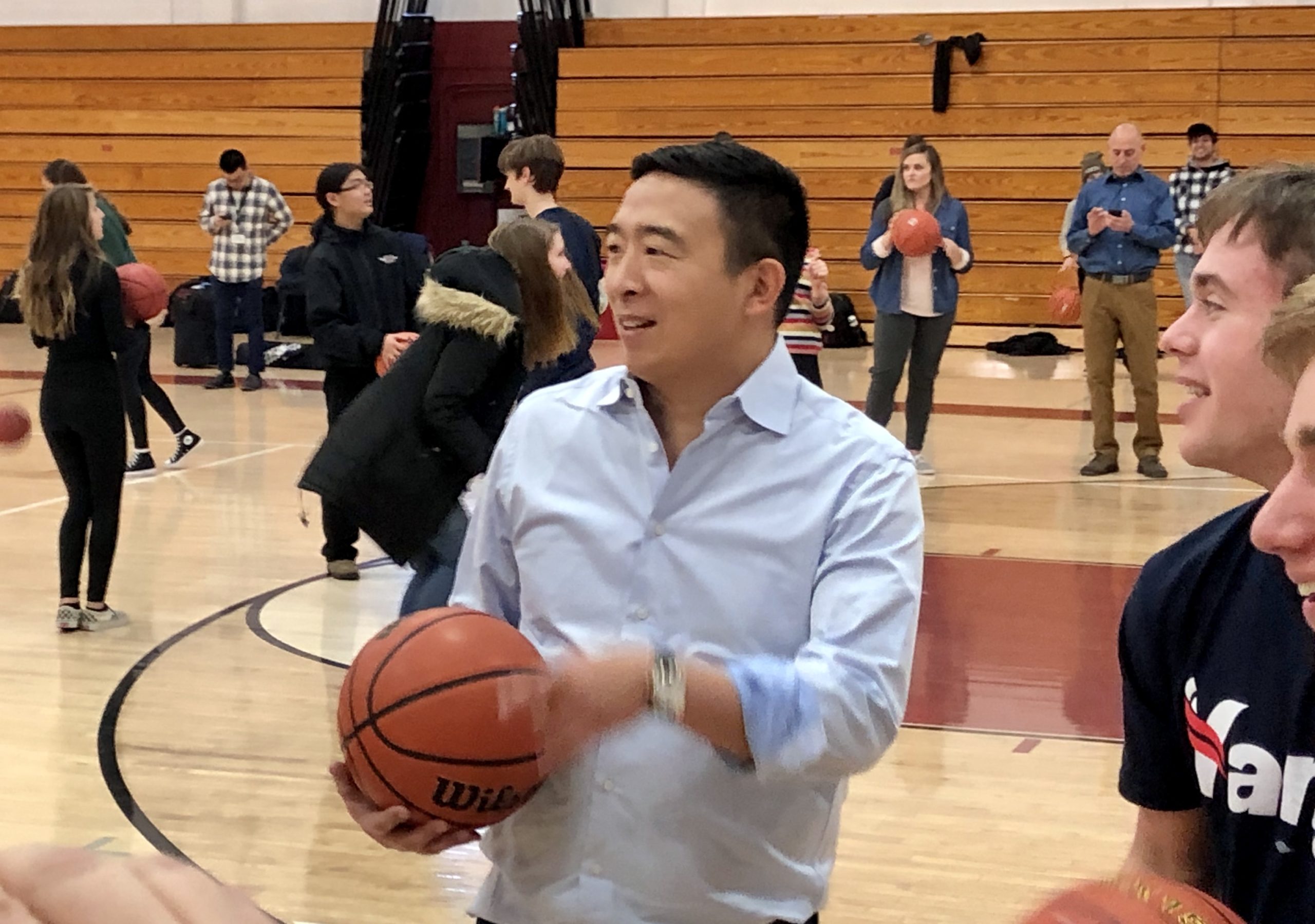 Appealing to young voters has paid off for the once-unknown tech entrepreneur. Though he continues to poll in single digits, he’s received enough support to make the Democratic debate stage in December — something experienced politicians like Sens. Cory Booker and Michael Bennet were unable to do. And Yang still has a shot at qualifying for the January debate in Iowa.

Yang’s managed to pull ahead of these pols thanks in large part to his support from younger voters, particularly those 18-29-year-olds. According to a Morning Consult poll in December, Yang is in fourth place among these voters at 9 percent. And he’s getting a larger share of his support from voters under 45 than anyone else in the field.

So catering to college students and teenagers may be a smart, short-term strategy for Yang, but it presents challenges in the long run.

For example, his plan to let 16-year-olds pick a future president is wildly unpopular with voters overall, with multiple polls showing 75 percent — or more — of Americans oppose the idea. It’s also out of step with moves across country to restrict the choices people under 21 can legally make, such as smoking cigarettes or vaping. When asked about this dichotomy, Yang insisted that 16-year-olds are adult enough to vote.

“You could argue that 16-year-olds don’t understand enough to vote. But that argument rings false to me when I actually interact with them, many of whom are very savvy and understand what’s going on around them,” Yang said. “And the fact is we’re not springing pop quizzes on voters when they show up to vote.

“We need to trust our people. And that includes our young people,” Yang said.