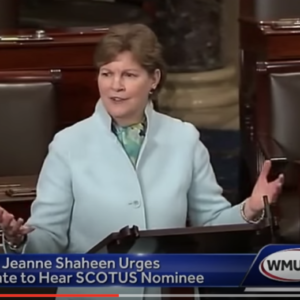 Would Shaheen Really Stand Up to Schumer Over Court Packing?

During a press call on Monday, GOP U.S. Senate candidate Corky Messner accused incumbent Democrat Sen. Jeanne Shaheen of being dishonest about her position on court packing. He also accused her of being more loyal to the national Democratic Party than to the people for New Hampshire.

Over the weekend, Shaheen said: “I don’t support packing the court, although I have to say I think that’s exactly what [Senate Majority Leader]  Mitch McConnell and Donald Trump have done.”

Asked by NHJournal if Shaheen was right that by filling court vacancies, McConnell and Trump are “packing the court,” as Shaheen claimed, Messner, an attorney, gave a lawyerly answer:

“The latest Democrat talking point that President Trump and the Republican Senate, by confirming Amy Coney Barrett, would be some kind of court-packing is pure propaganda. It’s trying to take the issue of court-packing and turn it on its head.”

Shaheen declined to respond to requests for clarification on her statement.

NHJournal also asked Messner if he believed the voters of New Hampshire could trust Shaheen to continue to oppose court-packing if Democrats took control of the Senate and the issue came to the floor with the support of her fellow Democrats. He dismissed her opposition as election-year rhetoric.

“Shaheen’s speaking out against court-packing is purely a political statement,” Messner claimed. “History shows us that she will follow the progressive lead in Washington. She would certainly do what she is told by [Senate Democratic Leader] Chuck Schumer and vote to pack the court.

The Messner campaign pointed out data from the left-leaning Pro Publica organization showing Shaheen votes with her party 93.7 percent of the time. Shaheen’s defenders claim that she has a bipartisan record, but she’s in the middle of the rankings by the independent Lugar Center, behind people like Sens. Lindsey Graham and Marco Rubio.

More significantly, Shaheen has a record of loyally aligning with her party in the most partisan moments, including:

While other Senate Democrats, like Sen. Joe Manchin of West Virginia, were willing to vote against party leadership, Shaheen fell in line every time.

Is there any reason to believe she wouldn’t do the same on eliminating the filibuster and packing the court, both of which Shaheen claims to oppose?

“Her political spin on what she does, and what she actually does, are two different things,” Messner said.

As for Shaheen’s stance that filling the vacancy left by the death of Justice Ruth Bader Ginsberg is “court-packing,” Messner mocked Democrats’ “silliness” by pointing out they wanted to put Merrick Garland on the Supreme Court in 2016. “Are they admitting they wanted to ‘pack the court’ in 2016?”

On Monday Shaheen tweeted, “It’s shameful that this Supreme Court nominee is being rammed through the Senate as Americans are voting. They should have a voice in this process!”

But in 2016, Shaheen took to the floor of the U.S. Senate to urge her fellow senators to vote on Merrick Garland’s SCOTUS nomination.

“It’s time for us to do our job,” Shaheen said. She apparently sees part of her job as giving her loyalty to the Democratic Party.

“She is loyal to the progressives and the Democrats in Washington, D.C., and you can’t believe what she’s saying,” Messner said.