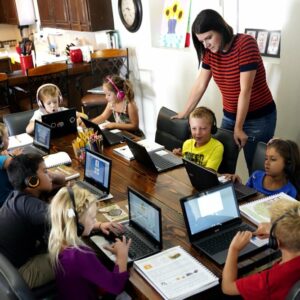 Cases of COVID-19 infections in New Hampshire schools keep rising, and now some schools are considering a return to remote learning to get through the winter surge.

Dr. Benjamin Chan, the state’s epidemiologist, held a conference call Wednesday briefing school leaders on the state of the pandemic. According to state data, there is a substantial level of transmission of the virus, with a 12.4 percent positivity rate, and 1,009.5 cases per 100,000 people in schools in the last 14 days.

Gov, Chris Sununu rejected the idea that New Hampshire school would close for the winter surge when asked by NH Journal this week. “Kids really need to be in school, they want to be in school, and that’s the best place for their education,” Sununu said.

Sununu said schools have the resources they need to stay open, but conceded a few might go remote due to the virus. He does not see closures being widespread.

“Going remote can be so detrimental,” Sununu said. “We really want kids to be in schools.”

So far, no Granite Stater under the age of 19 has died from COVID-19 since the start of the pandemic in early 2020, and few have been hospitalized.

The school lockdowns in early 2020 and remote learning for much of the 2020/2021 school year are now seen as causing harm to children who lost ground in their education and suffered mental and emotional health problems.

The school closures also harmed communities as parents felt pitted against their schools and teachers.

In Nashua, the public school district with 11,000 students kept classrooms closed through most of the 2020/2021 school year, until Sununu issued an executive order facing in-person classes resume in March of this year.

Nashua parents became frustrated by the school closures, and the group that sprang from that frustration, Nashua Parent Voice, organized protests against the Nashua board of education.

The protests continued this school year as many parents grew tired of mask mandates in schools. Others became angry over curriculum that focused on woke ideology over basic education, mirroring much of the angst at school boards nationally. And like the national situation, Nashua also had its share of kooks and bigots, like the Proud Boys, attend the board of education meetings to stir up problems.

A widespread return to remote learning could reignite parental anger, and hasten the exodus of families leaving pubic schools.