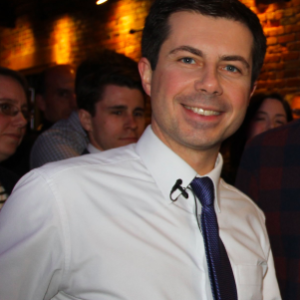 When former State Sen. Peter Burling hosted Mayor Pete Buttigieg at his Cornish, N.H. home this summer, more than 500 people showed up. “I take some of the credit — we had a guy selling lobster rolls to the crowd,” Burling told NHJournal. Still, it was an impressive turnout for a 37-year-old, largely unknown mayor from the Midwest.

How unknown? “My son and four friends had just flown in on the redeye from California and were in the kitchen cooking fish tacos when Mayor Pete came in. My son, who doesn’t follow politics quite as closely as I do, saw him and asked ‘Who are you?’ He just said ‘I’m Pete Buttigieg. People call me Mayor Pete.’

“And then my wife said ‘He’s the reason there are 500 people out on the lawn!’ and threw a loaf of bread at my son’s head.”

The crowd was enthusiastic, chanting “Pete, Pete, Pete” and former Democratic National Committeeman Burling was impressed. “He made an intense connection,” Burling said.

But two weeks ago, when Burling publicly announced his pick for president, it wasn’t Mayor Pete, but Minnesota Sen. Amy Klobuchar. What happened?

“It was never a negative reaction to Mayor Pete as much as it was an analysis,” he told InsideSources “I absolutely believe Pete Buttigieg is going to be president. Probably in 2028.”  But Klobuchar is a more realistic choice to take on Trump today.

This take on Buttigieg — “impressive but untested”— is often heard from New Hampshire Democrats, both party insiders and grassroots voters.  In many ways, he’s a perfect match for Granite State primary voters. His base is affluent, white, and college educated.  New Hampshire is one of the wealthiest and most educated — not to mention whitest — states in the country. New Hampshire is right in the Buttigieg wheelhouse.

And yet, after peaking in local polls last May at around 13 percent, Mayor Pete’s numbers began a slow decline, losing nearly 50 percent of his support.  He’s leveled back out just under 10 percent, which is better than most of the field, but it’s not close to the Warren/Biden/Sanders trifecta that’s consistently around 20 percent or higher.

Buttigieg backers believe that’s about to change. With polls showing he won the last Democratic debate and a spike in favorable media coverage, supporters think the Mayor Pete moment has arrived.

“I believe we have the wind at our back right now,” Kevin Donohoe with the Buttigieg campaign in New Hampshire told InsideSources. “According to the New York Times, we have more field offices in New Hampshire than any other campaign, and we’ve got nearly 70 staffers on the ground.”

Buttigieg also raised more money from New Hampshire contributors last quarter than any other Democrat except Sen. Bernie Sanders — who won the Granite State in 2016 and has a core of dedicated small-dollar donors giving every month. Outraising Sen. Elizabeth Warren in her own backyard is no mean feat. Neither is raising $44 million over six months and having about $25 million on hand.

And Mayor Pete’s still a big draw. The formal opening of his Portsmouth campaign office in September had to be moved to a nearby park to accommodate the crowds.

And yet doubts about Buttigieg remain.

New Hampshire campaign pros tell InsideSources that while they’re not hearing criticism of Buttigieg, they also rarely hear his name at all. Some counsel this means nothing, that the current state of many Granite State Democrats is “still shopping,” and Mayor Pete is clearly on the potential shopping list, even if he’s not generating as much campaign chatter as, say, Tulsi Gabbard.

Others, however, say it appears Buttigieg’s youth and lack of national experience are simply a bridge too far for Granite State Democrats who take their unique position as First-In-The-Nation voters very seriously.

“I just don’t see Biden voters going to him. They are two totally different candidates,” one longtime New Hampshire political operative told InsideSources. “One is old guard and has too much experience, and the other too young and too little experience.

“Mayor Pete will win the ‘shiny new candidate’ award this year but that’s it.”

New Hampshire progressive activist Herbert Thomason, Jr. — known as ‘Junior’ in Democratic circles — tells InsideSources that he and his fellow younger Democrats, many of them voters of color, are largely unimpressed by the “supposed frontrunners,” as he calls them. “Democrats keep saying we’re about a ‘new generation of leadership,’ then every election cycle we keep going back to the same people over and over again — even when we say we’re the party of the future.”

Junior is backing former President Obama’s HUD Secretary Julian Castro for president, as opposed to Buttigieg and other younger candidates, in part because Castro talks about issues important to people of color in ways they don’t.

“I had one person tell me ‘Mayor Pete seems pretty cool,’ but for him to be the youngest in the group, he still hasn’t grasped the energy of young voters out there,” Junior said. “He doesn’t seem to even try.”

One name that Democrats are hearing is “Donald Trump.” The ongoing impeachment fight may be bad news for the president, but it’s also not great for second-tier Democratic presidential candidates trying to break out of the pack. Trump is consuming so much media oxygen it’s hard for a candidate like Buttigieg to get any attention.

In a way, the Ukraine story is turning into the Democratic frontrunners’ best friend by freezing the field in place. It’s better for Joe Biden to have the news media talking about his son Hunter than about Buttigieg or Klobuchar.

Meanwhile, Buttigieg remains a calm, steady voice in the 2020 field. His Obama-esque implacability may help him with older voters worried about a youthful candidate’s lack of gravitas. At the same time, in a moment when the Democratic base appears ready to rumble, Buttigieg’s “let’s all calm down and discuss this” demeanor may not be the best fit.

Buttigieg’s success has been nothing short of phenomenal. But going from 37-year-old, mid-sized city mayor to 1600 Pennsylvania Avenue — and beating a field of seasoned and well-funded candidates in the process — would be closer to “miraculous.”