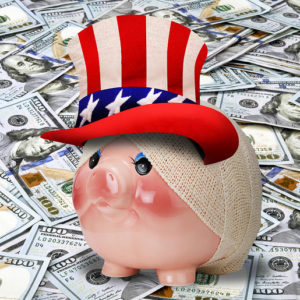 Democrats may have lost seats in the House, but their Congressional leaders aren’t backing down on some key initiatives despite a shrinking caucus. One of them: the return of “earmarks.”

Earmarks have been banned in the House since 2011 when a Republican majority ended the practice of inserting special projects in spending bills because of concerns about corruption and spending. Some of the most notorious earmarks of the past:

and $682,570 for the infamous “shrimp on a treadmill” research project.

A decade later, members of Congress are working to lift the ban and allow members to slip special spending projects into the budget process. Will New Hampshire’s congressional Democrats support the change?

New Hampshire is known for its fiscal conservatism and, at the state level, has the highest “return on investment” for tax dollars of any state. Democrats here have pointedly declined to endorse either the Green New Deal or Medicare For All. So what about a little low-level taxpayer-funded graft?

Sen. Jeanne Shaheen is all in. New Hampshire’s senior senator has supported the return of earmarks for years. “Shaheen says earmarks, often criticized as so-called pork spending, were a useful way for lawmakers to target money to projects in their home states,” NHPR reported in 2013.

Neither Rep. Annie Kuster nor Rep. Chris Pappas responded to requests for comment on the House Democrats’ plan to bring back earmarks.

With vaccines on the horizon, Washington budget hawks are already talking about the need to restrain spending once the COVID-19 pandemic is over. Reacting to Biden’s pick of former Fed chief Janet Yellen to be his Treasury Secretary, Republican Jim Banks (R-Ind.) tweeted,  “I would hope Yellen will stand by her previous comments that the climbing national debt ‘should keep people awake at night…'”

With divided government in DC, Democrats may not be able to get the earmarks system back up and running. If they try, which side will New Hampshire’s House members be on?