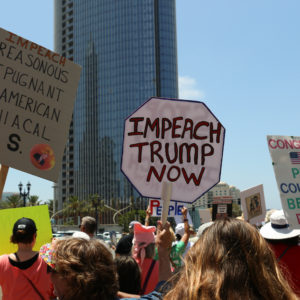 The “I” word is once again back in the news.

Texas Democrat Al Green said on C-SPAN Tuesday that “there is a good likelihood there will be Articles of Impeachment” if Democrats take control of the House.

“Every member of the House is accorded the opportunity to bring up impeachment,” Rep. Green said. “This is not something that the Constitution has bestowed upon leadership. It is something that every member has the right and privilege of doing. I am not sure that there will be members who are going to wait for someone else if that someone else, doesn’t matter who it is, is declining to do it. We can all do it. And I think there is a good likelihood there will be Articles of Impeachment.”

For Democrats running in the NH First Congressional District race, this isn’t a random issue. All nine are running to replace Rep. Carol Shea-Porter, who has co-sponsored legislation calling for the impeachment of President Trump. Only one of the candidates, Lincoln Soldati, has publicly pledged to maintain Shea-Porter’s position and support impeachment. (He’s even serving “ImPEACHment bubble tea” at his HQ office grand opening this week.) . Others, like Levi Sanders (son of Bernie), have expressed a willingness to consider it, but have stopped short of announcing their support.

Sanders said in April that “the American people aren’t there yet.”  Levi says “absolutely” Trump has committed impeachable offenses but says “I’m willing to consider it [impeachment] but I’m just not there yet.”

This may be part of a broader divide inside the Democratic Party. The New Yorker features a piece by legal writer Jeffrey Toobin this week entitled “Will the Fervor to Impeach Donald Trump Start a Democratic Civil War?”

The dilemma for Democrats, as Toobin reports, is that a new poll shows 47 percent of voters would definitely vote against a candidate who wanted to remove Trump from office, but 42 percent said they’d definitely vote for that candidates.  Nancy Pelosi says she doesn’t even like to talk about impeachment, but a huge portion of her base is clearly all in.

The GOP is doing its part to exacerbate the Democrats’ problem. NHGOP chair Jeanie Forrester released a statement on Tuesday demanding answers from the Democrats:

“Democrats are continuing to beat the drums of impeachment against President Trump because they cannot rationalize how deeply unpopular and weak Hillary Clinton was as a candidate in 2016. Obstructionist Carol Shea-Porter has been on the impeachment train for months. Do the Democrats running to replace her agree? Will Annie Kuster, Maggie Hassan, and Jeanne Shaheen move to impeach our President?”

So what will Democratic candidates do in swing districts like NH-01 (currently rated as “leans Democrat” by the Cook Political Report). Do they energize their base by doing full impeachment, or do they try to pull in moderates and Republicans in November by avoiding the topic today?