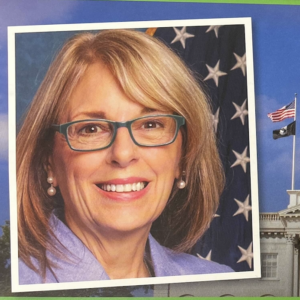 Will Bedford Voters Return to Republican Roots in Tuesday’s Election?

Voters in Bedford, a typically strong Republican town, chose Joe Biden for President in 2020, along with Sen. Jeanne Shaheen (D) for US Senate and progressive state Rep. Sue Mullen.

On Tuesday, they’ll send a new representative to Concord in a special election to fill a vacancy left by Hon. Dave Danielson’s (R) passing earlier this year. The House GOP currently has a razor-thin 11-vote majority, so every seat counts. Will they again buck their Republican-town label and choose another Democrat to serve alongside Sue Mullen under the Golden Dome?

NH House Republicans hope not – and they think the tax issue is enough to hold the seat.

The party and its allies have pulled out all the stops for Linda Rea Camarota (R-Bedford). Camarota previously served in the House from 2019-2020 but did not seek re-election last fall. More than 16 mailers have been sent by either Camarota’s campaign or on her behalf by the NHGOP, Gun Owners of America, and Americans for Prosperity – New Hampshire. They’re also counting on voters remorse following weeks of bad news stories for the Biden administration.

“In her previous time in the House, Linda distinguished herself by standing for fiscal responsibility and looking for innovative solutions to New Hampshire’s biggest problems. She understands the importance of economic growth and stability. As a registered nurse, she also knows the need to lower health care costs for all Granite Staters,” Greg Moore of Americans for Prosperity New Hampshire told WMUR last week. The libertarian political advocacy group sent four mailers on Camarota’s behalf and hosted multiple phone banks.

Of the 16 mailers urging voters to again choose Camarota, the vast majority have repeated an oft-used mantra – keep New Hampshire tax-free. Camarota, the NHGOP, and AFP-NH all focused heavily on taxation on their mailers.

They’ve also reminded voters that Democrata Catherine Rombeau raised property taxes by 10 percent during her time on the Bedford School Board – while Camarota voted for a reduction in state-wide property taxes that saved taxpayers more than $100 million. 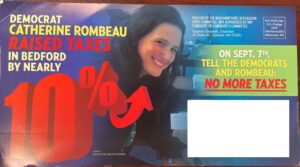 For Rombeau, the New Hampshire Leadership Committee spent more than $10,000 on mail on her behalf. Rombeau has been campaigning with popular State Rep. Sue Mullen. Mullen, a guidance counselor in Bedford’s High School for decades, was first elected in 2018 and re-elected in 2020, using her popularity with parents and former students to earn the top spot in 2018’s election before falling to 5th of 6 in 2020.

Mullen is the most progressive member of the most Republican-leaning House district in the state, according to an analysis by NHJournal.

While the seat leans Republican and a GOP win would hardly be a surprise, a big win in a district carried by Biden and Shaheen could be a boost as the party tries to pluck a Democratic-leaning seat in the upcoming Chesire-9 special election for Jaffrey, Roxbury, Dublin, and Fitzwilliam.

Republicans believe the political playing field has been tilting their way for weeks as Biden’s polls plunge. Bedford could be the first real-world test of their theory.