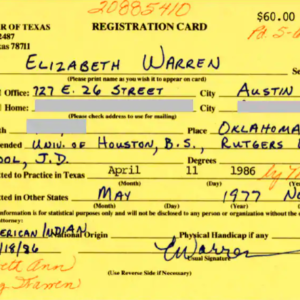 Will a Hand-Written Note From the 1980s End Elizabeth Warren’s Campaign?

“Don’t see how you recover from this.”

That was the instant reaction of NYU political science professor Ian Bremmer to the latest twist in the Elizabeth Warren/Native American saga.  The Washington Post has unearthed a State Bar of Texas registration form from 1986 in which Warren declares herself an “American Indian.”

Actually Bremmer wasn’t reacting to the story itself —  Warren’s less-than-accurate account of her alleged Native American standing has been in the news since her 2012 US Senate bid—but rather the image: The Post published the document itself (“Warren filled out the card by hand in neat blue ink and signed it”)  showing her direct declaration in her own handwriting that her “race” is “American Indian.”  And it’s the seeing that many Democrats believe is changing this story for the worse. 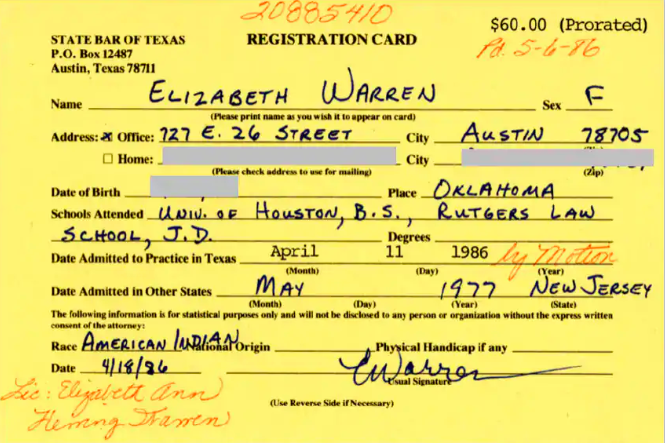 “Visuals always make a difference,” says Democratic strategist Joel Payne.  He should know. He worked on the John Edwards president campaign in 2008. “The video of Edwards primping his hair before an interview went viral and was lethal to our campaign,” he recalls.

It’s hard to reconcile the visual of Warren, who one Boston talk host described as looking more like a member of Abba than a Native American tribe, with her identity as an American Indian. So does seeing it make a difference?

“It will certainly make a difference to the Warren campaign, since nine times out of nine-and-a-half it’s going to be in a mail piece in the Democratic primary,” says South Carolina-based Democratic consultant Antjuan Seawright.

“What I’ve figured out about our primary voters, African-American voters in particular, is that what they want most of all is authenticity. Someone who is genuine,” Seawright says. “And, well, this could come off as less than genuine and less than authentic to some,” he told InsideSources.

Black voters represent 60 percent of the Democratic primary electorate in South Carolina, and about a quarter of the entire primary vote nationwide. Warren has been working to make inroads with these voters — she was one of the first Democrats to endorse the “Black Lives Matter” movement — she’s struggling to find support.  In a Monmouth poll released this week, Warren finishes in third place among all Democrats with 10 percent support, but among minority voters, that drops to six percent.

When the group “She the People,” which promotes female candidates of color, surveyed its own members, just 22 percent picked Warren as one of their top three candidates.  And when, during a speech to a historically-black college in New Orleans, Warren labeled the entire criminal justice system “racist, from front to back,” it sparked a backlash rather than support.

“Outside of diversity, authenticity is probably the most important character feature for any candidate who wants to remain viable in the Democratic primary,” Payne said. And despite her efforts, including an Instagram video of Warren grabbing a beer on New Year’s Eve to burnish her “common folk” bona fides, her campaign is moving in the wrong direction.

“The worst-case scenario for Warren is that this becomes a recurring issue over the long haul and leaves the impression with voters who may not know her so well that she has been dishonest, “ says Democratic consultant Lynda Tran, who also notes another, perhaps even more politically-dangerous, challenge for Warren:  In 2020, Democrats just don’t need her.

This isn’t happening in a vacuum, notes Tran. “Contrast her with a talented and vibrant field of Democratic presidential hopefuls, and she risks being dismissed as not strong enough to defeat Trump in the general election matchup.”

Seawright agrees: “With so many candidates in a robust primary, the ‘separation factor’ matters. This could be one of things her opponents use to separate her from the pack.  Many of these candidates, like Sen. Kamala Harris hav strong relationships with their communities.”

The Monmouth poll also found that the top priority for Democratic primary voters was finding a candidate who can beat President Trump. Why take a chance on Warren whose problematic identity politics is still generating breaking news and undiscovered documents years after the issue first surfaced?

Warren has been helped by the fact that the story broke the same day as the State of the Union speech, pushing it off the front page.  And after a shaky 2018 cycle where she repeatedly underperformed in polls of both Democratic activists and primary voters as a whole, Warren is widely agreed to have had a successful rollout. (She’s scheduled to formally announce her candidacy at a speech in the working-class community of Lawrence, MA on Saturday.)

However, it is also the case that Warren is only now apologizing for her questionable claims after being confronted with the newfound visual evidence, essentially waiting until she was caught.  She waited until last week to apologize to a representative of the Cherokee Nation and issued a blanket apology when confronted by the Post. I can’t go back,” she told the paper.

But even then she tried to reframe the issue away from her false statements and into one of misunderstanding about how Native American heritage is defined. “I am sorry for furthering confusion on tribal sovereignty and tribal citizenship and harm that resulted,” she said.

The real harm is to Sen. Elizabeth Warren’s authenticity.  Acknowledging that fact is the first step in winning it back.