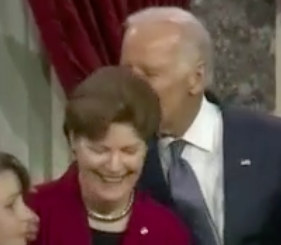 Why Are New Hampshire Democratic Women Giving Biden A Pass?

Neil Levesque, director of the New Hampshire Institute of Politics at Saint Anselm’s College, tells USA Today he doesn’t expect tales of Joe Biden’s handsy behavior to have much impact on the vice president’s support among Granite Staters. “Many voters are saying this is kind of minor compared to what we’ve seen in the past with candidates and accusations,” Levesque said.

And after hearing the deafening silence from Democratic women leaders in New Hampshire, it’s hard to argue with his conclusion.

The report from WMUR’s John DiStaso is must-see TV for feminists and progressives who want to understand where the state’s Democratic Party leadership truly is on this issue. Responding to the report of the first woman to come forward, Lucy Flores of New Mexico, Sen. Jeanne Shaheen–perhaps the most influential Democrat in the state–carefully avoided any criticism of Biden. Instead, she described Flores’ description of Biden’s uninvited touching as out of character.

“I was surprised by the allegation because that is not what I have seen from the Vice President,” Shaheen said — despite both years of the vice president publicly engaging in such behavior (often on video) and her own personal encounter with the hair-obsessed pol.

While they’ve been supportive of Flores, not one of the three Democratic women in the New Hampshire delegation has condemned Biden’s behavior.  “I commend Ms. Flores’ courage for sharing her story,” Congresswoman Annie Kuster said. “I’m confident that Vice President Biden will use this opportunity to listen and learn from this conversation.”

In fact, some New Hampshire Democratic women went out of their way to defend Biden.  State Sen. Martha Hennessey (D-Hanover) went so far as to question the integrity of Ms. Flores.  “I just can’t help but see this as a political maneuver,” she told WMUR, adding “I think it belittles those of us who have had serious assaults.”

How many Granite State Democratic women does Sen. Hennessey speak for?  How many progressive New Hampshire women agree?

Based on their public statements–all of them. Not a single progressive women’s organization in the Granite State has issued a public statement condemning Biden’s behavior, or challenging the Democratic leaders defending him.

Since the WMUR report first aired, three more women who’ve been groped or grabbed by Joe Biden have publicly shared their stories. But none of these New Hampshire Democratic women have spoken out or amended their comments. Sen. Hassan’s Twitter feed, for example, is currently a treasure trove of #GrrlPower tweets on Women’s History month, #EqualPayDay and the like.

But not one word about Biden.

Democrats who adamantly refuse to go on the record point the finger at Shaheen who, they say, has let it be known that Biden bashing is frowned upon by the state’s senior senator.  That makes pragmatic political sense, particularly given her relatively weak standing in the latest polls.  Having an old-school Democrat like Biden at the top of the ticket will mean Shaheen won’t have to spend 2020 defending far-Left, unpopular proposals like the Green New Deal.

But what about the state’s progressive activists?  Will these feminist women “speak truth to power,” or will they continue to put partisan goals first?

UPDATE: Joe Biden has posted a statement about the controversy on social media. Two words it does not contain: “Apologize” or “sorry.”

Social norms are changing. I understand that, and I’ve heard what these women are saying. Politics to me has always been about making connections, but I will be more mindful about respecting personal space in the future. That’s my responsibility and I will meet it. pic.twitter.com/Ya2mf5ODts