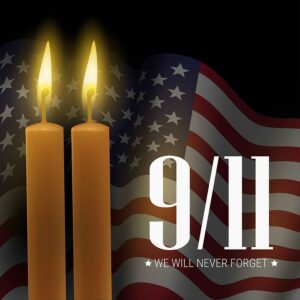 Where Were You When the World Stopped Turning? 20 Years Later

This is the 20th anniversary of 9-11-2001. It is a day when the tapestry of emotions, previously woven on that horrific day, floats up and touches that place in your psyche where memories never heal nor fade. There is seldom more than one day in a person’s lifetime where they will always remember where they were when an event happened that touched the core of their nation and of themselves.

On September 11, 2001, my wife and I were half an hour outside Las Vegas on Northwest Flight 1188 bound for Detroit. Having upgraded to first class, we watched the chief steward prepare to serve breakfast when his phone rang, summoning him to the cockpit. He exited with a strange, pale look on his face and immediately commenced to stow the serving gear. We could tell something was wrong. Was there a problem with the plane?

Then the captain, in a voice I can still hear to this very day, came over the intercom. “The United States is under attack. The World Trade Center Towers have been knocked down and the Pentagon has been bombed. The FAA has ordered all civilian aircraft in the United States to be grounded and to land at the nearest airport. We will be landing in Salt Lake City. We will have more information for you when we are on the ground. God protect the United States of America.” It was Sept 11, 2001. That’s how my Sept. 11th started. Every American alive that day remembers theirs. It’s seared into their DNA. If you know country music, Alan Jackson sang it best. “Where were you when the world stopped turning that September day?”

As I look back at that day and the days immediately following, certain images emerge that fill me with great pride, reverence, and, yes, dare I say it, hope. I saw the disappearance, albeit for a short time, of the hyphenated American. There were no longer Italian-Americans, Irish-Americans, Black-Americans, or Hispanic-Americans. There were just… Americans. The janitor outside the Salt Lake City Airport restroom, who spoke little English, needed to vent his anger and frustration. He needed to tell someone how he felt, and I was there to listen. The tears in his eyes communicated all that needed to be said.

I saw the power and courage of the average American. I saw images of the rescue workers running into the burning buildings while others were running out. I saw the grim-faced steel and construction workers dragging their equipment toward the 7-story smoldering pile under which thousands lay. I saw the dust-covered survivors digging with their bare hands for their buried comrades until they dropped from exhaustion. I saw so many average Americans compelled to join the rescue that they had to be turned away. And, of course, I saw the power and courage of those average Americans on United Flight 93 who made the choice to go down fighting.

I saw righteous anger. It is anger so deep as to make strong men cry in frustration. I saw America clench its fists and rise as one. I could only think of the words of the Battle Hymn of the Republic, “He hath loosed the fateful lightning of His terrible swift sword.”

I saw Old Glory raised at Ground Zero. I saw my country’s flag on every house and street corner. People sang the national anthem with tears in their eyes. I even saw a Republican president embrace a Democratic Senate Majority Leader on the floor of Congress. Instead of bringing the USA to its knees, the heinous attack of 9/11 had galvanized us. We stood together. One nation, under God, indivisible.

That was then. This is now, 20 years later. And human nature is as it is. Sadly, the chattering classes and talking heads regained their composure and changed the subject. The news media stopped showing the horrendous attack because it was making people “angry.” September 11th became “history,” subject to constant analysis, dissection, and revision depending on a political bent.

Yes, the nation smashed the terrorist threat, but as time progressed, it became routine. The narcotic of time clouded the clarity of what we had endured. As 9/11 faded into history, the people turned away from the enemy that had attacked the nation and looked for enemies among themselves.

And finally, we’ve come full circle. After September 11, 2001, the USA was a giant filled with a terrible resolve. We crushed the terrorists that attacked us and occupied Taliban-ruled Afghanistan, the nation that gave them refuge. We killed Osama bin Laden. But now, when September 11, 2021 dawns, the USA will have fled the nation we occupied that gave the 9/11 terrorists refuge. In our leaders’ eagerness to leave, we abandoned billions worth of modern weapons to the Taliban and, even worse, abandoned American citizens, and our Afghan allies, to the Taliban’s tender mercies. The terrorists are now stronger in 2021 than before the attack of September 11, 2001.

We were not outfought. We were outled.

Whether by chance or design, one would think we are more divided now than on Sept. 10, 2001. We may well see even greater dangers in the future. Likely so. Can this divided nation stand together again? I refuse to accept the division as being final. It’s only superficial. We are the same people that stood tall and stood together on 9/11/2001.

What we saw and how we behaved in the aftermath of 9/11 was who we are!

We must tell our children and grandchildren what we saw and how we felt. They need to know that the strength and love of our country still exist in its people and that the better angels of our nature will be there when needed. God Bless the United States of America.

Rep. Andrew Renzullo (R-Hudson/Pelham) is Chairman of the House Resources, Recreation and Development Committee. He wrote this for NHJournal.com.