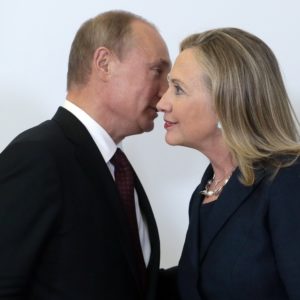 What the Heck Is Up With Hillary?

Joe McCarthy had nothing on Hillary Clinton.

Tail Gunner Joe was famous for seeing Commies behind every tree, but even he didn’t see Russians behind his right-wing allies. When Hillary gets her “McCarthy” on, however, not even the most far-left fellow travelers are safe.

“I’m not making any predictions, but I think they’ve got their eye on somebody who’s currently in the Democratic primary and they’re grooming her to be the third-party candidate,” Clinton said. “She’s the favorite of the Russians. They have a bunch of sites and bots and other ways of supporting her.”

While Hillary didn’t use Gabbard’s name, when her spokesperson Nick Merrill was asked if Clinton was referencing the 2020 candidate he replied, “If the nesting doll fits.

“This is not some outlandish claim,” Merrill added. “This is reality.”

Or as Joe Biden would put it, “Gabbard’s a Ruskie–not a joke!” That’s what the Clinton camp is saying.

And in Hillary’s head, it’s not just Gabbard. Devoted Green Party progressive Jill Stein, who also ran in 2016 and has been pushing single-payer healthcare and Green New Deal policies for years, is “a Russian asset–totally!” Hillary says.

This is not a good look for a woman who was the party’s nominee just three years ago and who continues to inject herself into the media cycle. However, Clinton loyalists continue to defend her. Terry Shumaker, her New Hampshire state co-chair in 2016, retweeted messages supporting her claims that Gabbard is a Russian ally and accusing her of being a homophobe.

Neither woman targeted by Hillary was impressed.

“Clinton has spent her entire career as an asset of Wall Street, the police state and war — the real dangers to everyday people in the United States and around the world,” Green Party communications manager Michael O’Neil said in a statement.

And Gabbard went right at Clinton with a conspiracy theory of her own.

“Thank you @HillaryClinton,” Gabbard tweeted out. “You, the queen of warmongers, embodiment of corruption, and personification of the rot that has sickened the Democratic Party for so long, have finally come out from behind the curtain. From the day I announced my candidacy, there has been a concerted campaign to destroy my reputation. We wondered who was behind it and why.

“Now we know — it was always you, through your proxies and powerful allies in the corporate media and war machine, afraid of the threat I pose. It’s now clear that this primary is between you and me.”

Over the weekend, Gabbard posted a video responding to Clinton’s accusations, pointing out that she volunteered for military service, including deployment in the Middle East, and she’s served on the Armed Services and Homeland Security committees in the House.

“If they can falsely portray me as a traitor, they can do it to anyone,” Gabbard says.

Other progressives, including former Obama official Van Jones, are disturbed by Clinton’s comments.

“She’s playing a very dangerous game,” Jones said on CNN. “She is Hillary Clinton. She’s a legend. She’s going to be in the history books and she’s a former nominee of our party and she just came out against a sitting U.S. congresswoman, a decorated war veteran and someone running for the nomination of our party with a complete smear and no facts.”

It is interesting that Clinton can’t seem to stay out of the 2020 conversation. For months she’s been stepping up her unfounded claims that Trump is an “illegitimate” president, and that somehow the election was stolen from her (though she has yet to explain what the Russians did to keep her out of Wisconsin during the 2016 campaign).

Is her decision to attack a 2020 candidate (perhaps two if Jill Stein runs again) an attempt to test the waters for a return? A way to remind Democratic voters that she’s on the sidelines in case Biden’s campaign goes from steady slide to sudden slump? Perhaps she’s just giving voice to the discomfort some of her fellow Democrats feel about Gabbard’s candidacy. (“She really is crazy,” one New Hampshire Democratic activist told NHJournal.)

Or maybe Hillary Clinton is the Donald Trump of the Democratic Party, and her narcissism and need for attention are impossible to contain?

Whatever’s going through Hillary’s head, what’s coming out of it isn’t helping the Democrats’ 2020 campaign.