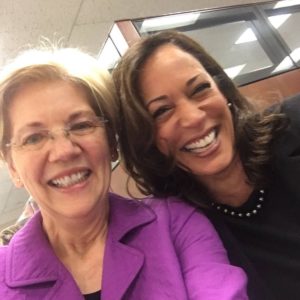 What Do (Democratic) Women Want? To Beat Trump.

Over at POLITICO, they’ve taken a deep dive into the latest Morning Consult polling data to see where the top five 2020 Democratic candidates (Biden, Buttigieg, Harris, Sanders and Warren) are getting their support. From men? Women? Minority voters? The white and wealthy? The blue-collar and broke?

Interestingly, they break down the women’s vote this way: 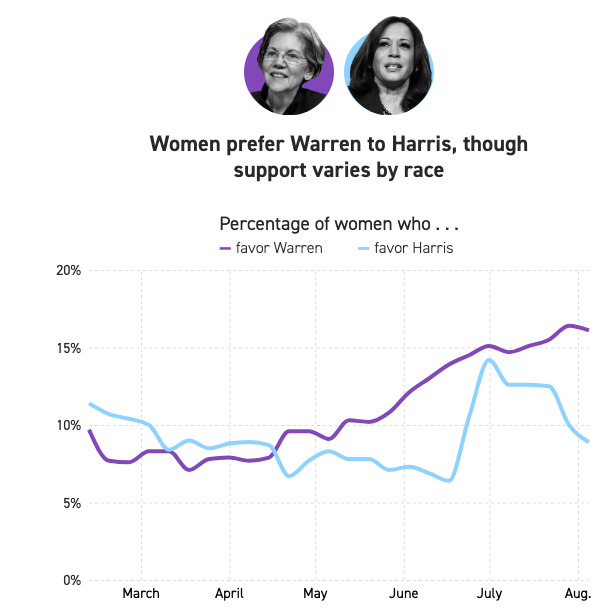 Is it interesting that Sen. Warren has about an 8 point lead over Sen. Harris among women voters? Perhaps. But what’s even more interesting is both are losing the women vote to Joe Biden and Bernie Sanders.  POLITICO didn’t bother to chart it, but Joe Biden is consistently the top vote-getter among women, averaging around 23 percent of their vote in recent polling.  Sen. Sanders is essentially tied with Warren for the women’s vote, each averaging around 17 percent or so.

Sen. Harris is consistently stuck at around 8 percent among female voters.

Isn’t it more significant that women voters are backing Biden over the rest of the field then it is that Warren’s outperforming Harris among women voters?  But if you’re looking for troubling demographic data, wait! There’s more: 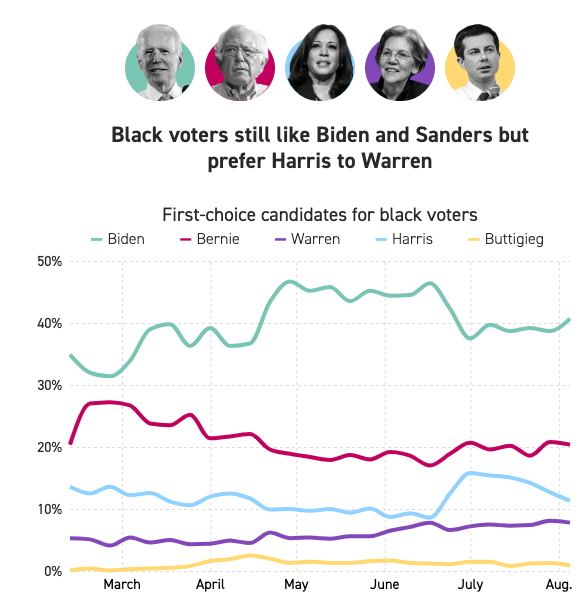 Sen. Kamala Harris barely breaks double-digits among black voters, losing to both Sanders and (by almost 4-to-1) Joe Biden. After a brief post-first-debate surge, her support with African-Americans is sagging. If current trends hold, she will soon have less support in the black community than Elizabeth Warren. In fact, in the new YouGov/Economist poll released today, Warren has 10 percent support from black voters while Harris has 8 percent.

The standard reaction to polling in August about a primary season that doesn’t begin until February is that it’s too early, nobody’s paying attention yet, the fall is the real campaign season, etc. etc. All legitimate points.

But it’s also the case that Sen. Harris has been campaigning hard for six months now, and yet her support among African-Americans remains underwhelming. (Could be worse: Sen. Cory Booker’s stuck at 5 percent.)

And Elizabeth Warren has essentially 100 percent name ID among Democratic primary voters, but she is still stuck battling with Bernie Sanders for support among women–a fight she’s losing to Joe Biden despite his less-than-stellar track record on women’s issues.

The good news behind all these numbers may be that, as much as Democratic candidates obsess with identity politics and the issues of race and gender, the voters themselves appear to be looking beyond that to another factor they find more compelling:

Who can beat Donald Trump?

In the same YouGov poll, women Democrats were just as willing as their male counterparts to say they preferred a candidate who could win in November (60 percent) over one who agrees with them on the issues (40 percent). That number is nearly identical (61-39 percent) among black Democrats.

As long as they believe he’s the best candidate for the job, Joe Biden’s got a rainbow coalition of Democrats ready to make him their party’s nominee.