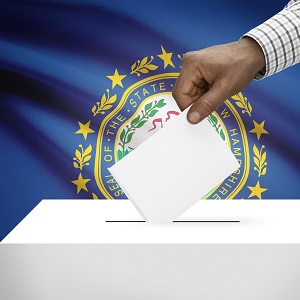 What Are Campaign Pros Watching on Primary Day?

What will New Hampshire’s political pros, insiders and grassroots activists be watching for when the polls close on Tuesday?

While President Trump has kept his focus on the NHGOP primaries for U.S. Senate and the NH-01 congressional seat (Trump tweeted on behalf of Corky Messner and Matt Mowers Monday night), the race that’s getting the most attention among Granite State political observers is the Democrats’ gubernatorial primary between state Sen. Dan Feltes and Executive Councilor Andru Volinsky.

Polls show the race is neck and neck, though polls also show voters aren’t particularly tuned into the race. Only about half of Democrats’ surveyed know who the candidates are. This is likely due to the impacts of both the COVID-19 pandemic and the sheer volume of a presidential race that involves Donald Trump. It’s hard for other stories to gain any attention.

What makes this race interesting is whether New Hampshire Democrats are ready to break character and back the more progressive candidate in the primary. While Bernie Sanders has won two N.H. Democratic presidential primaries in a row, Sanders-backed candidates haven’t fared as well in state elections. Sanders endorsed Volinsky early on, and he held a virtual event for the candidate Monday night.

As Sanders campaign manager Irene Lin tweeted, “If a progressive can’t win in New Hampshire, especially when the other Democrat is a pro-fracking centrist?”

Volinsky has also refused to take The Pledge, declining to commit to opposing broad-based income or sales taxes in New Hampshire. That’s one reason the race has caught the eye of veteran Democrat Terry Shumaker, former US Ambassador who co-chaired Bill Clinton’s N.H. campaigns.

“As to the many interesting primary races, am curious to see if N.H. GOP voters again reject yet more ‘carpetbagger’ candidates as they did with Scott Brown,” Shumaker told NHJournal. “And on the Democratic side, if not taking The Pledge remains toxic or not?”

If Volinsky does win, it could signal a shift in the center of political gravity in the New Hampshire Democratic Party away from establishment moderates like Sen. Jeanne Shaheen.

Veteran NHGOP strategist Mike Dennehy is also watching the Democrats’ primary, though with a different motive. “I am hoping and praying Volinsky pulls it off, and I think he will. Would love to make this race about taxes!”

Dennehy is also watching voter turnout, which he predicts will be modest for Republicans, despite a U.S. Senate primary and contested primaries in both congressional districts. “I’m expecting relatively low to moderate turnout for Republicans — around 130,000.”

Secretary of State Bill Gardner agrees, saying Monday he expects more than 200,000 ballots to be cast for only the fourth time ever in a September primary. “There will be more Democratic ballots cast than Republicans,” Gardner said. More than 100,000 absentee ballots have been requested and more than 75,000 had been returned as of Monday morning, the Union-Leader reports.

Democratic requests for absentee ballots lead GOP requests by a 3-to-1 margin.

While she’s excited about Democratic turnout, Arnesen is also afraid that the debate over masks, mandates and politics may result in tensions — and perhaps even violence — at New Hampshire polling places. She says Trump and his political allies have been promoting a political climate that’s more likely to lead to violence. “I’m worried about the safety and security of these elections, and not just from COVID-19.”

Another grassroots progressive, Ted Bosen of Berlin, says that “Although gubernatorial polling is close, I am seeing a good response for Volinsky around here, so I will go out in a limb to predict he wins Berlin.” Asked about the latest UNH poll showing Feltes leading Volinsky by 3o points in the North County, Bosen doesn’t buy it. “I’m sticking with my prediction.”

And in this era of COVID-19, political pros will also be watching is the mechanics of the election itself.

“I’ve been skeptical of September primaries for decades, but I’m glad we have one this year so voters and the incredibly underappreciated folks who run our elections have a chance to get ready for the ‘Super Bowl’ on November 3,” Shumaker told NHJournal.