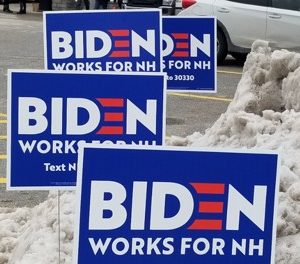 What a Week! The Final Tally of Winners and Losers from #FITN Primary

The New Hampshire ‘First in the Nation’ primary campaign technically began on July 28, 2017 when former Maryland Rep. John Delaney declared his candidacy, and in the ensuing months it sometimes felt to locals like it would never end.

But on Tuesday night Granite State voters and election workers took care of business, sorting the field into potential winners, fading former frontrunners, and guaranteed losers. After the uncertainty of the Iowa Caucus — a fiasco that cost the state’s Democratic chairman his job — New Hampshire’s relative clarity was a cause for relief.

Not as much clarity as Democrats would like, alas. Instead of a primary field reduced to a two or three-way fight, there are at least five candidates — Joe Biden, Pete Buttigieg, Amy Klobuchar, Bernie Sanders and Elizabeth Warren — still in contention for the nomination. Not to mention Michael Bloomberg and his billions waiting for the post-South Carolina survivors.

So who were the real winners and losers of the New Hampshire primary? Not just the candidates, but the many local people and institutions who play a role in the #FITN primary? NHJournal asked some pundits and political pros to weigh in.

St. Anselm College and the New Hampshire Institute of Politics (NHIOP).  Neil Levesque’s crew at St. A’s won rave reviews for their handling of the onslaught of candidates and the multitude of media covering them. “The NHIOP burnished its reputation as the leading go-to venue for primary candidates and media alike,” says NHGOP campaign pro Jim Merrill. During the 2020 cycle, they hosted 14 CNN town halls and 21 Politics and Eggs breakfasts, in addition to the dozen or so events in an average week. The “Lesser-Known Candidates Forum” alone makes them a New Hampshire political treasure.

The Doubletree Hotel in downtown Manchester: Several political pros and pundits gave a shout out to the repeatedly-renamed hotel for hosting TV networks and the teeming throngs of pols “without apparent hitches or glitches” as former Democratic state party chair Kathy Sullivan put it. It was once again the ideal spot for spotting media/political celebs, though some groused about the Doubletree’s decision to shut down the Penstock (formerly JD’s Tavern) for MSNBC.

Secretary of State Bill Gardner: Just over a year ago, Gardner was fighting for his political life as the legislature narrowly re-elected him with a four-vote margin. Today he’s the man of the hour, overseeing a virtually problem-free primary. “New Hampshire looks incredibly competent in conducting an election where voters use paper ballots, have them all counted and the results tabulated all in a timely manner,” says political science professor Wayne Lesperance of New England College.

Gardner tells NHJournal he’s flattered to be on the “winners” list, but he gives credit to the 6,000 local election workers who were part of the process, noting that training for the #FITN began before the 2018 midterms.

New Hampshire Diners: From the Red Arrow to the Tilt’n, the rest of America could be forgiven for believing Granite Staters spend all their free time chatting up pols and wolfing down pancakes at an endless line of diners. Not that there’s anything wrong with that.

Fox News:  Forget partisanship. Sullivan says they’re losers for setting up their headquarters out at the Bedford Village Inn. “Missed out on all the action in downtown Manchester,” she says.

Andru Volinsky: “He really wanted to see Bernie Sanders do a lot better,” one NH political insider said. Sanders has endorsed the Executive Councilor in the Democratic primary for governor. “A big win, like a number that starts with a three, would have given him a bounce. Andy’s got to be disappointed.”

Yard Signs and Billboards: “Despite Tulsi Gabbard’s best efforts, she couldn’t bring them back into vogue,” Merrill says.

Some people and institutions made both the winner and loser lists, depending on your viewpoint.

Trump and the NHGOP: Jim Merrill says the #FITN was a big win for President Trump. “A huge rally on primary eve and a huge turnout on primary day in a virtually uncontested race,” he says. “An impressive down payment on what will be an aggressive Trump campaign to win New Hampshire in November.”  But Democratic strategist Jim Demers says the primary was a bad day for the GOP. “Fifteen percent of Republicans either voted for a Republican other than President Trump or wrote in a Democrat. That’s a problem if it carries over to November,” Demers says.

Democrats/The DNC:  Professor Lesperance says the Democrats took it on the chin in New Hampshire this year. “They didn’t achieve their goal of having the nomination wrapped up quickly,” he says. “The fact that debate rules are being changed in a way that allows Bloomberg access to the stage looks craven and manipulative. The party is creating its own challenges.”

But Sullivan declares the New Hampshire Democratic Party big winners. “That Saturday night dinner made the party a lot of money for the November election effort.”

And then there’s the biggest question of all: Was Tuesday a win for the New Hampshire primary itself?

Definitely not, says progressive activist Maura Dolan of the organization Left Of Center. “The biggest loser was New Hampshire, with more and more people recognizing that the state is not representative of the country, and questioning the wisdom of continuing to place so much stock in the outcome of its primary. New Hampshire needs to start working now to keep their first in the nation status,” she says.

Wrong, says Demers. “Our primary came off without a glitch. And with a record turnout as well.” His Republican counterpart, Jim Merrill, agrees. “When the whole world was worried about the state of the election after Iowa, NH delivered in a big way.”

Professor Lesperance believes the primary itself was a loser, but not necessarily because of the debate over diversity. “The primary suffered from the effort by the DNC and the national media/pollsters to nationalize the nomination process. If this trend continues, New Hampshire’s future role is in serious jeopardy.”

Agree? Disagree? Have a winner or loser to nominate yourself? Send an email to [email protected]