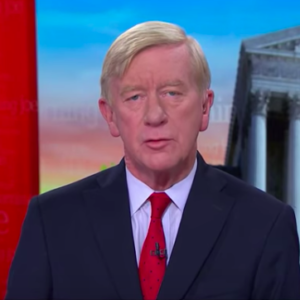 After previously calling for President Donald Trump’s impeachment, former Massachusett Gov. Bill Weld has stepped up his attacks, telling MSNBC’s Joe Scarborough Trump is guilty of the crime of treason and should face execution.

One month ago, Weld told New Hampshire Journal that if Trump is re-elected, “I think Congress should impeach him.” In a Monday morning TV appearance beside his fellow GOP presidential primary candidates, former S.C. Gov. Mark Sanford and former Illinois Rep. Joe Walsh, Weld used the current controversy over a phone call between Trump and Ukrainian President Volodymyr Zelensky to go even farther.

“He’s now acknowledged that in a single phone call right after he suspended $250 million of military aid to Ukraine, he pressed the president of Ukraine eight times to investigate Joe Biden, who [Trump] thinks is going to be running against him. Talk about pressuring a foreign country to interfere with and control a U.S. election,” Weld said.

“It couldn’t be clearer: That’s not just undermining democratic institutions, that is treason. It’s treason, pure and simple, and the penalty for treason under the U.S. code is death. That’s the only penalty. The penalty under the Constitution is removal from office, which might look pretty good if [Trump] can work out a plea deal.”

Proving that Weld’s comment wasn’t merely another of the caustic quips for which the longtime pol is known,  he demonstrated in a follow-up question that he’s given the matter of Trump’s treason and execution serious thought.

“The legal framework is in the U.S. criminal code. The only penalty for treason is death, it’s spelled out in the statute,” Weld explained. “Under the Constitution, the grounds for removal from office are treason, bribery, and other high crimes and misdemeanors.

Not everyone was impressed with Weld’s legal analysis.

“This is not helpful, Gov. Weld. Treason is narrowly defined and Trump’s conduct is many things but not actually treason,” former federal prosecutor and NBC News legal analysist Mimi Rocah tweeted. “Let’s not raise the bar with unnecessary hyperbole.”

In the same MSNBC interview, Walsh drew his line at impeachment: “Donald Trump needs to be impeached, period. This man is a king, he’s a would-be dictator…this man is a clear and present danger to this country.”