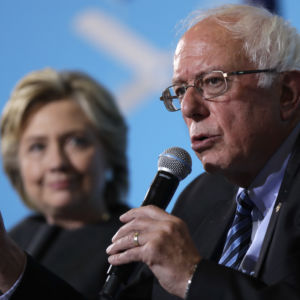 New Hampshire supporters of Hillary Clinton’s 2016 campaign aren’t speaking on the record, but talk to them over a cold beer or a hot cup of coffee and you’ll soon find out how they really feel:

When it comes to Bernie Sanders, they haven’t forgiven.  And they are not in the mood to forget.

“It’s an open wound,” one longtime Granite State Democrat told InsideSources on background. “We’re you at the convention? Sanders supporters actually booed our party’s nominee. I’ve never seen anything like it, and I’ll never forgive them for it.”

“I would say — and for all I know, the Sanders people might take this as a compliment — among a lot of the major donors in the party, there’s concern that he could emerge,” Brock said. “There are some very dyed-in-the-wool Democrats that wouldn’t at all be enthusiastic about supporting him in a general election.”

The feeling is mutual. On Thursday Sen. Sanders fired back by using Brock’s own words in a fundraising email.

After quoting Brock’s comment, Team Bernie wrote that “’Major donors’ have never been excited about our campaign. That’s alright. We aren’t counting on their support, and Bernie doesn’t want their money.”

This is precisely the progressive posturing that some 2016 Clinton supporters find so hard off-putting.

“They’re pissed,” says one former Hillary staffer about her supporters. “There’s definitely some smoldering heat left over. I’m not going to call it a blood feud…but I wouldn’t say it’s not one, either.”

The impacts of the bitter 2016 election still linger, in part because the passions at the time were so high. Some Sanders supporters were so committed to their candidate that even now they are still angry at Sen. Elizabeth Warren for endorsing Hillary, not Bernie, in 2016–despite the fact that Warren waited until after Clinton had all but secured the nomination.

A few months later, after her loss to Donald Trump, Hillary Clinton wrote in her book “What Happened” that Bernie “isn’t a Democrat… He didn’t get into the race to make sure a Democrat won the White House, he got in to disrupt the Democratic Party.

“I am proud to be a Democrat and I wish Bernie were, too,” Clinton wrote.

And for his part, Sen. Sanders has made it clear he’s not interested in appeasing Hillary Clinton. On the ABC TV show The View, for example, Sanders dismissed the notion of doing what other candidates have a done and going to Secretary Clinton for campaign advice.

“I think not,” Sanders told Meghan McCain. “Hillary and I have fundamental differences.

Democratic strategists insist that the party will unite — “That’s what our primaries are for,” the New Hampshire Democrat says— but there’s a solid year of political combat yet to come.  Will the Clinton camp be able to resist the temptation to get in and block Bernie’s candidacy?

It doesn’t help ease hurt feelings among Clinton fans that, for the moment, Bernie’s campaign is soaring. He’s followed up his massive announcement-day fundraising haul of $6 million with a steady stream of small-dollar donations, plus generally-positive press and poll numbers that consistently put him well out front of the other announced candidates. The only Democrat with more support than Bernie is former Vice President– and current 2020 fence-sitter — Joe Biden.

Clinton allies have reacted to Bernie’s success by pushing out negative stories, like Bernie’s use of private jets and his once less-than-progressive record.  Some former Clinton staffers have also been trashing the Vermont senator’s backers. “These Bernie supporters are basically acting like it’s spring of 2016,” former Clinton aide Adam Parkhomenko told the liberal website Talking Points Memo. “[Sanders] doesn’t stand up and tell them to cut the s**t.

“Everyone’s saying ‘let’s stick together,’ and they are literally some of the most vicious and nasty people online,” Parkhomenko said.

Zerlina Maxwell, director of progressive media for the 2016 Hillary Clinton campaign, has a similar take on Team Bernie.  After getting into a social media tussle with some of his supporters last month, Maxwell tweeted:  “The Bernie folks are not good at advocating for their candidate without being abusive. That’s a problem!”

But DC-based Democratic consultant Joel Payne, who worked on the 2016 Clinton campaign as well, says his fellow Hillary fans need to realize that Sanders’ populism and insurgent approach matches the current mood of the Democratic party. And, therefore, they find a way to make peace.

“No matter how they feel, the Clinton loyalists need to be careful not to make Bernie’s people feel like they’re not part of the party,” Payne tells InsideSources. “The Democratic base isn’t in the mood for top-down leadership right now. It’s a populist moment and many consider Bernie to be the reigning ‘people’s champion.’”

It won’t be easy. Another New Hampshire Democratic and former Clinton backer insider tells InsideSources: “It’s not that we’re angry. It’s more like we wish he’d just go away.”