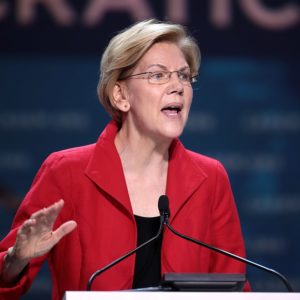 Three years ago, Sanders crushed his party’s eventual nominee Hillary Clinton here in New Hampshire with 60 percent of the 2016 primary vote.  In February he was in first place in the same Emerson College polling at 27 percent. But in today’s Emerson poll, he’s a distant third.

The new poll, taken September 6-9, gives former Vice President Joe Biden a narrow lead over Warren, 24 to 21 percent; Sanders at 13 percent; and South Bend, Ind. Mayor Pete Buttigieg in fourth place with 11 percent. No other candidates were in double-digits among New Hampshire Democrats.

“Sanders problem isn’t just Warren,” Prof. Spencer Kimball, Director of Emerson Polling, told NHJournal. “He’s losing voters to Buttigieg and [Rep. Tulsi] Gabbard as well. For Sanders, the question is whether his base of 18-29 year olds is splintering away from him, or if this poll is an outlier.”

“We’ve been watching her support slowly build for awhile,” Kimball said. “There’s still a strong military tradition among New Hampshire voters, and her service likely resonates with them.” Gabbard currently serves as a major in the Hawaii National Guard.

“Plus, I think being left out of the debate actually helped her. The media focused on her story and she ended getting more attention.”

Sanders has slipped into third place, albeit by just 0.3 percent, in the national RCP average as well.

Bernie backers point to other polls, like the new CBS News/YouGov poll, with Sanders’ support at 25 percent and the Vermont senator deadlocked with Biden (26 percent) and Warren (27 percent). But even in that poll, Sanders is still in third place.

And Politico reports a survey of 100 delegates to the state Democratic convention on Saturday found Warren “led the way among the surveyed delegates who had made up their minds, followed by Bernie Sanders in second and Biden in third.”

Third place among New Hampshire activists for the former vice president isn’t great.  Should Joe Biden supporters in New Hampshire be worried? Longtime supporter and NH Democratic strategist Terry Shumaker, who co-chaired Bill Clinton’s 1992 campaign, isn’t. He notes the Emerson poll finds that while Warren may be popular among progressives, she’s the only Democrat in the survey who loses in a head-to-head match-up against Donald Trump while Biden defeats him by ten points.

In fact, even tech entrepreneur and political novice Andrew Yang performs better against Trump than Elizabeth Warren, which feeds the concerns some Democrats have that nominating a progressive who pleases the base may backfire and hand the election to President Trump.

“I get it, there is a lot at stake [in this election] and people are scared,” Warren told New Hampshire Democrats in her speech on Saturday. “But we cannot choose a candidate we do not believe in because we are scared.”

Not every Democrat agrees. “I’m going to go with whoever can get this president out. I don’t have the luxury to figure out who I really love,” convention delegate Kim (she declined to give her last name) of Bedford, N.H. told NHJournal. “I really want a woman president, I need to see a woman in the White House before I leave this planet.

“But we have to get rid of this president,” Kim said.