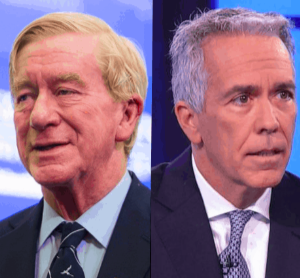 While President Trump is in New York talking to the UN and dealing with the Democrats’ impeachment inquiry, two of the three Republicans who want to replace him are in the Big Apple for their first 2020 GOP presidential debate.

A few hours after the president’s address to the United Nations, Joe Walsh and Bill Weld will be facing off at the New York headquarters of the media outlet Business Insider which is hosting the debate.

Not surprisingly, President Trump won’t be dropping by. Somewhat more surprisingly, neither will former South Carolina Gov. Mark Sanford, who is campaigning in Iowa.

Weld, who served as the Republican governor of Massachusetts from 1991-97, told InsideSources, “This debate will give us an opportunity to show voters there are, in fact, candidates for President who represent basic principles of fiscal restraint, a strong and coherent foreign policy and respect for the rule of law. Ours is a center-right nation. I look forward to a discussion of the issues around which Americans can unite, rather than being divided by the politicians who profit from harsh partisanship.”

Former Illinois congressman and radio talk host Joe Walsh said he’s looking forward to the debate, not to take on Weld, but to call out Trump. “I’m not going to be debating Bill Weld. I like Bill. I’m going to be talking about Donald Trump and why we’ve got to end this presidency. That’s who I’m debating against.”

Sanford said that while he cannot attend the debate, if given the opportunity to ask a question Tuesday it would be “What’s happened to the Republican Party on debt and spending? Where are we going as a nation on that front?

“You may have noticed Walsh’s tagline of late has been ‘You can’t be serious about this race if your main issue is the debt.’ I’d turn that around and say you can’t be a serious candidate without talking about it.”

Walsh has a question of his own: “I’d ask the three of us who we plan to vote for if we don’t win the nomination? Are you going to vote for Trump? Because that’s Mark Sanford’s answer, and I just don’t get that.”

According to the Business Insider website, the debate can be viewed on Facebook starting at 7pm eastern. It will be hosted by Henry Blodget, CEO, Insider Inc.; Anthony Fisher, politics editor, Insider (the sibling publication of Business Insider); and Linette Lopez, opinion columnist, Business Insider.