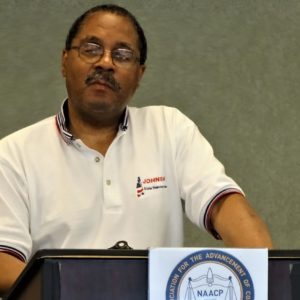 Rogers Johnson, president of the Seacoast NAACP, addresses the organization on July 6, 2020.
News

Volinsky Escapes Call for Resignation, But Not Criticism, at Seacoast NAACP Meeting

There was tension in the room during Monday night’s meeting of the Seacoast branch of the NAACP in Portsmouth while members discussed asking for Executive Councilor Andru Volinsky’s resignation based on his treatment of two black nominees to state positions.

Some members of the branch are furious because Volinsky, who is running for governor, used the term “tokenism” to describe Gov. Chris Sununu’s nomination of Ryan Terrell to the state Board of Education June 10.

They also take exception to Volinsky’s assertions that former Republican U.S. congressional candidate Eddie Edwards is not qualified to head the Office of Professional Licensure and Certification. Volinsky made the statement even before Sununu publicly announced Edwards’ nomination in mid-March.

Seacoast NAACP member David Holt of Somersworth defended Volinsky on Monday, along with some others who participated in the meeting remotely.

“He has a long history with the NAACP,” Holt said. “This is not a racial issue, this is politics.”

Dover attorney Virginia Towler said Volinsky is progressive and, therefore, should be given the benefit of the doubt.

“Maybe his choice of words has been regrettable, but I think you have to look at the bigger picture,” Towler said.

Edwards, who attended the meeting in person, responded by asking how the non-political organization would handle the matter if Volinsky was a Republican and he was a Democrat.

“How would the conversation be different if we were talking about three conservative white men and a black liberal?” Edwards asked. “Do conservative black lives matter? Do we have a voice?”

Edwards said the organization will lose credibility if they excuse Volinsky’s comments because he has been an ally to people of color in the past.

Victoria Sullivan, who ran for mayor of Manchester last year, was there to support Terrell and Edwards. She took exception to Holt’s comments.

“Sir, I find your comments very insulting to other people that support Eddie… We are all in this together,” Sullivan said.

President Rogers Johnson said that since he put the vote on the agenda two weeks ago, Juan Cofield, president of the New England Area Conference of the NAACP, asked the local chapter to reconsider their position.

Johnson said he could no longer speak on behalf of the branch, but members can come together to do so. They plan to invite Volinsky to their August meeting and may hold a vote to ask for his resignation after hearing from him directly.

Johnson said Volinsky was invited for Monday’s meeting, but said he could not make it.

Terrell is a 29-year-old black businessman from Nashua who is a specialist in digital systems. He told NHJournal he wanted to be on the state Board of Education because of his traditional and nontraditional education experience.

Terrell attended a charter school in New Orleans prior to Hurricane Katrina. After the devastating storm, he ended up going to three different high schools in two different states before graduating from Dutchtown High School outside of Baton Rouge, La.

Terrell said when Volinsky called Sununu’s nomination “demeaning” and “tokenism,” he was disappointed.

“I know Councilor Volinsky to be a very thorough researcher who does his due diligence, and so it was really disappointing and frankly, it really hurt me to hear those words said about my nomination,” Terrell said during a NHJournal interview in June.

Two weeks later, Edwards withdrew his nomination to head the Office of Professional Licensure and Certification, saying Volinsky, along with executive councilors Debora Pignatelli and Michael Cryans, denied him a public hearing for more than 100 days.

Edwards is a former South Hampton police chief who was the director of the New Hampshire Liquor Commission Enforcement Division from 2005 to 2013.

Volinsky is not the only executive councilor being scrutinized for their behavior. Pignatelli wrote an opinion piece published on indepthnh.org June 27 which said Terrell and Edwards were “not good fits” for the positions Sununu nominated them for.

“I am going to have to get another telephone line to field all the calls I am getting in opposition to this Governor’s inappropriate nominations! The calls and emails from knowledgeable people keep arriving in large numbers,” Pignatelli said.

Edwards responded with his own opinion piece published on indepthnh.org Thursday.

“It feels awful now knowing the true reason I was structurally denied a hearing was because you decided I was not a ‘good fit’ for the position at hand before even speaking with me,” Edwards wrote.

“I am not sure if you realize how humiliating this is to both women and men. Why are you making such an effort to draw the line of value between black men and black women?” Edwards wrote.

The next meeting of the Seacoast branch of the NAACP is on Aug. 3.