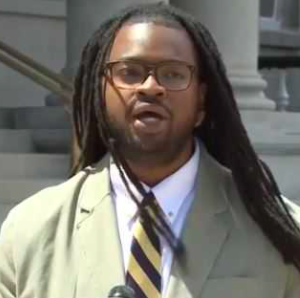 Executive Councilor Andru Volinsky dismissed the nomination of Ryan Terrell for the State Board of Education — the first African-American nominee in a generation — as “demeaning” and “tokenism” during Wednesday’s executive councilor meeting. Terrell’s nomination was defeated in a 3-2 party-line vote by the Democratic majority.

Terrell is a 29-year-old SNHU graduate with a degree in integrated studies who works as a project manager for a subsidiary of Anagnost Investments. He was nominated by Gov. Chris Sununu to fill the District 5 seat of Helen Honorow, who has been term-limited out of the position.

Volinsky accused Terrell of lacking an “understanding of important complex education issues, like special education funding and homeschooling” and having “no informed opinions about how education should occur.”

“This is an exceedingly inappropriate and demeaning appointment to a very important board. And I can only vote against it,” Volinsky said.

Volinsky’s racially charged language comes as thousands have taken to the streets of New Hampshire to protest against racial injustice, inspired by the horrific death of George Floyd at the hands of a Minneapolis, Minnesota, police officer. Volinsky’s comments prompted an immediate response from Sununu.

“Ryan Terrell is absolutely brilliant,” Sununu told the executive council as they prepared to vote. “We’re talking about an individual whose school was completely destroyed in Hurricane Katrina. Then he had to attend a charter school during his middle school years. Ultimately made his way to New Hampshire. He’s somebody with an outside perspective about how to make systems more efficient, about how to innovate.

“That’s exactly what we’ve been striving for, to have somebody with a diverse background,  a person of color who brings diversity to the board,” Sununu said, before adding:

“Of all times to reject a candidate like this — I’m shocked.”

He wasn’t the only one.

“To be honest, I thought he was crazy,” NAACP Seacoast President Rogers J. Johnson told NHJournal of Volinsky’s comments. “It was crazy because Ryan Terrell is so obviously qualified for the job.”

Johnson points to Terrell’s traumatic experiences due to Hurricane Katrina (“he went through hell”) and his business experience as a project manager. “Looking at his biography and his accomplishments, I’d say he’s uniquely qualified to bring the Board of Education a perspective they need.”

Under New Hampshire state law, members of the state Board of Education are required to come from outside the education bureaucracy and “shall not be technical educators or professionally engaged in school work.”

And what did Ryan Terrell think of Volinsky’s language?

Terrell comes from a family full of educators, but because of Katrina, he’s had a non-traditional education. He participated in SNHU’s College Unbound program that merged traditional classroom education with real-world internships and deliverable-based project work. This diversity of experience, Terrell says, is more significant than his race.

“I’ve never experienced a moment of racial discrimination or bigotry in New Hampshire,” Terrell said. “The Granite State has embraced me as one of its own.”

And, Terrell added, “I’ve always respected [Volinsky’s] position and his experience with helping the citizens of New Hampshire.” Which is why the Democratic councilor’s words were so painful.

“Frankly, it really hurt me to hear ‘tokenism’ and ‘demeaning’ associated with my nomination. It hurt because I didn’t see his words as it relates to his concerns over my alleged lack of experience. He was referencing who I am as a person in a way for him to see it as ‘demeaning’ for me to be nominated,” Terrell said.

“Not surprising the last 24 hours have seen a lot of “token” “boy” or “you’re being used” in my mentions. Let me get this straight…you DON’T want the person who has faced racial profiling by police, been pulled over dozens of times, or been speaking out for YEARS drafting this [legislation]?”

“Ryan Terrell is an exceptionally bright, thoughtful person who would’ve served with distinction on the Board of Education. He didn’t deserve to be personally belittled by an executive councilor and told, amazingly, to get in the back of the line, just for volunteering to serve his state,” Cline said.

Terrell isn’t the only candidate of color Volinsky has targeted.

He’s also leading the opposition to Eddie Edwards’ nomination to lead the office of occupational licensing. Edwards is African American and he ran against Democrat Chris Pappas in the 2018 First Congressional District race. Volinsky and his fellow Democrats on the executive council won’t even allow a hearing on Edwards’ nomination.