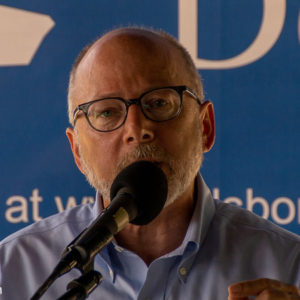 Volinsky Says $600 Weekly Unemployment Payment Too High, Should Be Cut

Executive Councilor Andru Volinsky says federal $600 weekly unemployment payments are too high and should be cut, a position that caught some of his supporters off guard and sparked a furious round of attacks from his Democratic opponent.

On Jack Heath’s radio show, Volinsky was asked about the weekly federal COVID-19 unemployment stipend that Congress appears ready to reduce or even eliminate.

“I’ve been reading about that,” Volinsky said. “There’s been some unintended consequences to that $600 additional payment, people could earn more money by not going to work. I don’t think that’s a good result. But dropping to the 70 percent level doesn’t help, either. I think there’s room for compromise in between.”

It’s not the position many Democrats expected Volinsky, an unapologetic progressive and vocal supporter of socialist Sen. Bernie Sanders, to take. It certainly got the attention of state Sen. Dan Feltes, his primary opponent in the governor’s race, who promptly sent out an email targeting Volinsky.

“While someone gifted a ski resort or someone who spent decades as a corporate attorney might not understand what $600 means to the average family, having represented hundreds of low-middle income Granite Staters crushed by job loss during the last economic crisis of the Great Recession, and having worked with dozens more during this crisis, I can tell you that unemployment insurance is not ‘lucrative’ or too high, as Governor Sununu or Councilor Volinsky claims. Unemployment insurance is not having ‘unintended consequences’; it’s helping working families actually get by, it’s helping ensure the bills are paid, including to many landlords and small businesses, and it’s helping stabilize our local economy here in New Hampshire.

“Working people and working families want someone in their corner in the corner office, and, if I have the honor and privilege of serving in that capacity, each and every day I’ll put working families first — always,” Feltes said.

Attempting to link Volinsky to moderate GOP Gov. Chris Sununu (the guy that “gifted a ski resort”) may be a bit of a stretch. Still, Feltes is right that the executive councilor’s stance is at odds with the current mood of the Democratic Party.

“What do the Republicans and the White House have against working families in our country that they would begrudge them $600 of, well, absolutely necessary sustenance?” House Speaker Nancy Pelosi said last week. “Everybody wants to talk about being family friendly — let’s not squawk about $600.”

Feltes took to Twitter to call Volinsky out. (“I can tell you that unemployment insurance is not ‘lucrative’ or too high, as my opponents have claimed.”)

Volinsky’s position may not be progressive, but it appears to be economically sound. An analysis by the New York Times found that the average person earning $35,000 a year who received COVID-19 unemployment benefits would collect $944 a week — 140 percent of what they would have earned working.

According to Secretary of Labor Eugene Scalia, 70 percent of people who collected unemployment during the pandemic were earning more money than they did in their jobs.

No wonder business owners are saying they’re struggling to get workers back on the job.

According to a paper published by the National Bureau of Economic Research (NBER), “Unemployment benefit levels that exceed worker earnings, policies that subsidize employee retention, occupational licensing restrictions, and regulatory barriers to business formation will impede reallocation responses to the COVID-19 shock.”

But if Volinsky’s position is in line with most economists, it’s out of step with much of his own platform. He’s a supporter of a mandatory $15/hour minimum wage and Medicare For All, and he supported Democratic legislation (vetoed by Sununu) that would have extended COVID-19 unemployment benefits to workers who were offered jobs but claimed they were too scared of the virus to go back to work.

The “Too Scared to Work” proposal was put in the legislation by… Dan Feltes.

So is Volinsky showing his fiscally responsible side? Or did he just mishandle a simple question?

Watch for a “clarification” in the next 48 hours.