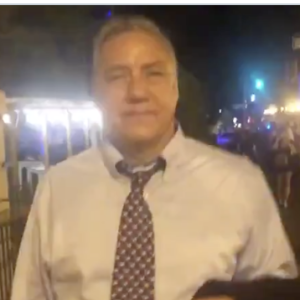 My name is Chris, I live in New Hampshire, and I’m one of the growing number of average citizens who’ve found themselves targeted in the progressive attacks on the streets of America.

You may have seen me. Millions of people have viewed the viral video of anti-Trump activists circling me, screaming insults and profanity, as I walked down a D.C. sidewalk.

Who am I? In one sense, I’m nobody. In another–I’m everybody.

I’m a Republican National Committeeman who was fortunate enough to get invited to watch President Trump’s RNC acceptance speech live at the White House. When it was over, a friend and I walked back to our cars — or tried to, anyway. That’s when a group of 30 or so Antifa and Black Lives Matter activists began their screaming assault, following us for blocks. Someone in the mob even knew my name. Imagine how unnerving that could be.

The good news is we eventually made it to our parking garage, and the mob moved on. Unbeknownst to me, some of their colleagues were simultaneously attempting to assault Sen. Rand Paul, the Kentucky Republican. Afterward, he thanked the police for “literally saving our lives from a crazed mob.”

I had the pleasure of meeting Sen. Paul at the White House event earlier that day and even took a selfie with him. He’s a well-known U.S. Senator. What happened to him that night was wrong. Political violence should not be tolerated, as Joe Biden has just recently (finally?) started saying himself.

But it’s the viral videos showing anonymous Americans like me being abused that I believe are more dangerous: A woman trying to eat a quiet meal at a D.C. diner, beset upon by an angry crowd demanding that she declare support for Black Lives Matter. A high school kid in a MAGA hat, targeted for a viral video moment by politically-savvy activists. A customer at a Massachusetts restaurant banned from the establishment by a “woke” waiter who overheard his criticism of the Black Lives Matter movement.

These aren’t people who’ve entered the political fray. They’re just citizens going about their lives, who suddenly find themselves swept up in a political tide, examples to all Americans watching of what can happen to you simply for not being part of the progressive cause.

The tactics of these “mostly peaceful protesters” are classic: Fear and intimidation. Burn, loot, scream obscenities, march on people’s homes — make anyone who’s not openly on their side aware that they could be the next target.

I’m not a political strategist, but I don’t believe it’s working.

Two of my registered Democrat friends recently told me they are voting Trump in 2020. They voted for Hilary Clinton in 2016. When asked why they responded, “those people are nuts,” referring to the BLM/Antifa activists who are destroying our cities and harassing innocent people.

I disagree with my friends. These people aren’t just “nuts,” they are a Democrat Party-inspired, highly-coordinated, and well-funded intimidation effort. Their goal is to defeat President Trump and push America to accept extreme policies most voters don’t support.

For months, I’ve watched as the press has tried to paper over the violence, and liberal politicians have invented a distance between protests and violence that doesn’t exist. Democrats once appeared to believe they could control the mobs and create just enough disorder to undermine the Trump presidency, but not so much that it hurt the progressive cause. They were wrong.

As I stood there on a sidewalk in our nation’s capital, surrounded by mask-wearing activists screaming the worst profanities imaginable, I thought to myself, nobody – Republican, Democrat, Independent, black, white, brown, gay, devoutly religious – should fear walking down a public street in America. I believe what I experienced, and what Americans are seeing on streets from coast-to-coast, is an orchestrated attempt at extortion of our upcoming election.

Joe Biden has said it himself: The violence won’t end as long as Donald Trump is in office. The subtext: Vote him out — or else.

I’ve experienced the “or else.” And I refuse to be intimidated. I support Donald Trump for many reasons, from his handling of the economy to his support for conservative causes like the Second Amendment and religious freedom. I understand that others don’t share my views.

But it’s wrong for Trump’s opponents to suggest that violence is inevitable if I vote for the candidate who supports the causes I believe in.

No matter how much intimidation I face between now and November, I’m proudly voting for Donald Trump.

Chris Ager is the RNC National Committeeman from New Hampshire. He wrote this for NHJournal.com.