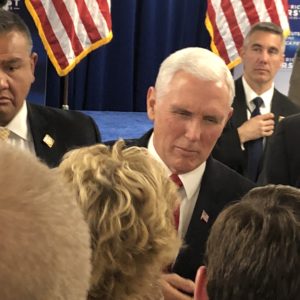 In a stump-style speech in Manchester, Pence rolled through the numbers on the U.S. economy in the first year of the Trump administration and, by any measure, they added up to good news for the GOP.

“If you’ve been listening to President Trump, he keeps saying it comes down to the simple words: Jobs, jobs, jobs,” the vice president told a crowd of several hundred at the Manchester Downtown Hotel. He urged the gathered faithful to spread the word of good economic news “neighbor to neighbor.”

“Tell them we’re putting Washington back to work for them, not the other way around,” Pence said.

The event was sponsored by a pro-Trump advocacy group, America First Policies, as part of a national tour promoting the GOP-backed tax cuts in swing states like Iowa, Michigan, and Pennsylvania.

Among the numbers crunched by the vice president:

“The only sector that lost jobs in February,” Pence asked? “The federal government,” he said, to cheers from the crowd.

Pence was also careful to share the political wealth with New Hampshire’s Republican Governor Chris Sununu. (Pence headlined a fundraiser for Sununu after the event.) In addition to talking up New Hampshire’s economic success—the fastest-growing economy in New England and near-record-low unemployment–Pence praised Sununu on the issue of confronting the opioid epidemic, a topic President Trump addressed in a Manchester speech on Monday.

“For his leadership on the issue of opioid addiction, the nation owes Governor Sununu a debt of gratitude.”

That was, by the way, the only time the word “debt” was spoken by the former deficit hawk vice president. No mention of the federal debt crossing the $21 trillion-dollar mark, and only praise for the massive spending bill that passed the House earlier in the day.  Pence praised the increases in military spending (“The biggest raise for our military in 10 years”), spending on jobs programs, and he even tried to spin the paltry $1.6 billion for Trump’s border wall as a win.

“With the $1.6 billion in the bill that’s headed to President Trump’s desk, we are gonna start building that wall!” Pence said to cheers.

But that’s Pence’s place in the Trump universe: Positive spin for the traditionalist Republicans and evangelicals in the GOP coalition. Where Trump is the mean tweet, Pence is the warm smile—quoting Bible verses and preaching the good, upbeat word on Trump.  Pence’s political advisor, Marty Obst, calls it “the tip of the spear” strategy, and Pence is clearly pointed at the heart of the old-school Republicans—values voters and suburban Republicans—who would have rejected a candidate like Trump in years past.

And Pence seemed to connect.  Several people attended the speech from a Manchester-area faith-based drug rehab program. When I asked one of the recovering addicts, Jacqueline, what her favorite part of Pence’s speech was, she said “it was at the end, when he asked us all to pray for him and for the nation.”

While the people from this group were quick to say they aren’t political, when I asked Jaqueline if any part of Pence’s remarks on the economy resonated with her, she said she “teared up when he started talking about all the jobs. I started thinking maybe when I’ve finished the program, I can get a job and take care my three year old.”

These are the sort of voters, and reactions, that are easy for the urban, East-Coast media to miss.

One other interesting New Hampshire note: Former Sen. Kelly Ayotte, who participated in a roundtable discussion of tax policy before Pence’s speech, got—not one, but two—standing ovations from the pro-Trump attendees. This despite the fact that she very publicly declared in 2016 that she would not vote for Donald Trump and instead wrote in Pence for president.

She received shout outs from Gov. Sununu and Vice President Pence and a warm welcome from the crowd. Not bad for a woman who said just over a year ago that “I cannot and will not support a candidate for president who brags about degrading and assaulting women.”

Other items of note from Pence’s speech:

CAPITAL PUNISHMENT: “Yes, we are going to get tough on drug dealers, including the death penalty.”

TRADE: Pence, a lifelong free trader who voted for 11 free trade agreements as a member of Congress (and voted against ZERO) had only praise for President Trump’s new tariff regime targeting China.

PELOSI: “Nancy Pelosi calls a thousand-dollar bonus ‘crumbs?’” My wife Karen and I had a word for a thousand bucks you weren’t counting on that appeared at the end of the year: ‘Christmas.’”