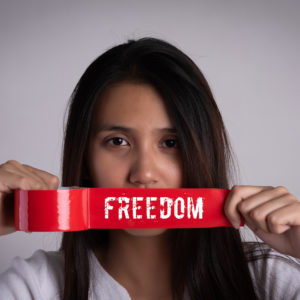 The contentious fight over freedom of expression has come to the University of New Hampshire, where a progressive professor has signed onto a letter supporting the suppression of free speech and defending what’s commonly known as “cancel culture.”

Last week, a group of academics and writers signed the “Harper’s Letter,” an appeal for more open dialogue and freedom of expression, published in the pages of Harper’s magazine. The 150 signatories, largely from the political Left, included Margaret Atwood, Noam Chomsky, Malcolm Gladwell and J.K. Rowling.

The letter warned of a growing tide of illiberalism, “a vogue for public shaming and ostracism,” and a weakening of “our norms of open debate and toleration of differences in favor of ideological conformity.”

“Editors are fired for running controversial pieces; books are withdrawn for alleged inauthenticity; journalists are barred from writing on certain topics; professors are investigated for quoting works of literature in class; a researcher is fired for circulating a peer-reviewed academic study; and the heads of organizations are ousted for what are sometimes just clumsy mistakes,” the letter reads in part.

“We refuse any false choice between justice and freedom, which cannot exist without each other.”

In response, 160 progressive academics and writers published an open letter on The Objective website, rejecting the premise that free speech is under assault. They characterized the letter as a defense of “the intellectual freedom of cis white intellectuals,” which “has never been under threat en masse” from “so-called cancel culture.” [emphasis added].

One signer was University of New Hampshire professor of astrophysics Chanda Prescod-Weinstein.

Prescod-Weinstein didn’t respond to repeated requests for comment. However, her resume of political activism is well established. For example, she’s one of the academics who argues that human beings should re-think going to Mars over concerns of “colonialism.”

“Perhaps life hasn’t developed there yet. Perhaps life may develop in future. Will our interactions with Mars preclude that possibility? Do we have the right to make that choice for the ecosystem?” Prescod-Weinstein asked at a 2018 symposium on “Decolonizing Mars.”

“Can we be trusted to be equitable in our dealings with each other in a Martian context if the U.S. and Canadian governments continue to attack indigenous sovereignty, violate indigenous lands, and engage in genocidal activities against indigenous people?”

Now Prescod-Weinstein has signed onto a letter that discourages exploration of ideas on college campuses.

One of the complaints from Prescod-Weinstein and her fellow signatories is that many of the people who signed the “Harper’s letter” are relatively wealthy or influential and are, therefore, unlikely to be canceled.

Well-known Harvard linguist and science writer Steven Pinker who, ironically, was just the target of a cancel campaign last week, concedes that point, but he told NHJournal that they’re missing the bigger picture.

“The harm done by punishing an unorthodox scholar is not just his or her suffering, but the incentive structure it advertises. When we object to autocracies that imprison a few dissidents, this is not ‘anecdata’ because, despite the small numbers, the punishment is designed to intimidate a far larger number of potential dissidents and entrench a single opinion by brute force.”

“They ignore the regime of intimidation that prevents many journalists and scholars from expressing opinions in the first place,” Pinker added. “I hear from them every day.”