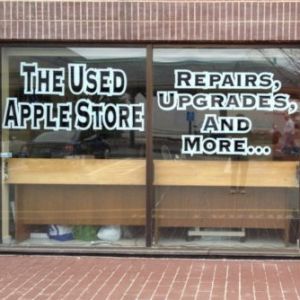 Turning Away GOP Customers in NH May Not Be Smart, But It’s Not Illegal

When the Used Apple Store of Derry, NH announced that Republican customers would be turned away—for being “evil”—it wasn’t doing anything illegal. Or, it turns out, all that unusual.

The Trump era has inspired a spate of stories about businesses large and small refusing service to Republicans and/or Trump supporters: Tech companies who’ve announced they will “will no longer do business with any person that is a registered Republican or supports Donald Trump;” fast food restaurants where Trump fans go unserved.

At a Mexican restaurant in upstate New York, not only was a couple wearing Trump gear refused service, the owner followed them out shouting “We don’t serve Trump supporters here. Get out of here and never come back.’ ”

So perhaps New Hampshire residents who need their MacBooks repaired should count themselves lucky to get off with just a rude Facebook post. “We say ‘no thank you’ to any Republican. If you affiliate with the Republican Party you are not welcome into our store,” the store posted on its page. “You have an uptight, closed energy, negative aura to you… almost evil, and to be honest, usually evil.”

Perhaps, but they also make up a (slim) majority of the voters registered by party in New Hampshire, not to mention their local customer base. Donald Trump beat Hillary Clinton in Derry 58-42 percent (Trump lost statewide by less than 3,000 votes).  So why do it?

“People are saying ‘half the people around you, you know, why aren’t you taking their money?’  And the thing that I always give them is Schindler’s List,” store owner Billy Williams says.  “And we’re similar. Just taking people’s money, it’s almost a brainless way of getting by.” If Republicans really are the moral equivalent of Nazis, that makes sense. But does he really believe something so extreme? When asked directly if he believed all Republican are evil, Williams responded “I think if they’re not evil there’s a reason they’re siding with that, so I think they’re non-discretionary, that’s what I would call it.”

Williams says this effort is part of his “absolute goodness theory.”  Roxanne Juliano of the New Hampshire Human Rights Commission doesn’t care what he calls it, but as long as it focuses on political affiliation and not “age, sex, sexual orientation, race, creed, color, marital status, familial status, physical or mental disability or national origin,” he won’t run afoul of the law. Juliano, who is preparing to retire after 34 years on the Commission declined to describe the Used Apple Store’s anti-GOP stance the “strangest” discrimination policy she’s ever seen, but did concede it’s “unusual.”

Juliano also noted the entire story is somewhat ironic, given the New Hampshire legislature is currently in the process of expanding anti-discrimination protections to include gender identity.  The Republican-controlled House Judiciary Committee sent the bill on to the full House for consideration last week, and Gov. Chris Sununu (R) has expressed his support.

As of yet, however, there’s no discussion of including political discrimination. Should there be?”

“In Seattle, they have a ban on discrimination based on ideology,” notes UCLA law professor Eugene Volokh, “while the District of Columbia has more narrow protections based on party affiliation.” No states have these protections and, Volokh says, they’re not necessary. “I don’t think we need more regulation of businesses. Other forces, like social pressure and pursuit of profits, tend to keep this behavior in check.”

“Besides,” he adds, “many liberals don’t want to be seen as intolerant.”

Perhaps. But that didn’t stop liberal CEO Mathew Blanchfield from announcing that his tech company 1st In SEO “will no longer do business with any person that is a registered Republican or supports Donald Trump…If you are a Republican, voted for Donald Trump or support Donald Trump, in any manner, you are not welcome at 1st In SEO and we ask you to leave our firm.”

And in the wake of the 2016 election, major retailers like Nordstrom, TJMaxx and Neiman Marcus began dropping Trump-branded products, under pressure from an anti-Trump movement called #GrabYourWallet. Some shoppers responded by saying this move made them, as Republicans, feel unwelcome.

“I expected Nordstrom to have better class than to have such a one-sided view” of politics, Dawn Hudspeth, a conservative-leaning shopper told Racked.com.  She noted a (since-deleted) tweet from a Nordstrom senior management official celebrating their decision to drop Ivanka products with #YesWeCan! #YesWeDid!

The comments from the owner of the Used Apple Store would tend to back up her thesis.

UPDATE: Billy Williams, owner of the Used Apple Store in Derry, NH, has posted a FB message rescinding his “No Republicans” policy:

I came down hard on the Republicans the past few days, but now my Independence has swung the other way,” Williams posted.  “Take care and I look forward to any and all who wish to come in.”

Williams also announced that he “supports Donald Trump,” though he didn’t vote for him, and that he’s a “liberal independent.”  He has since declined to apologize for banning Republicans from his store, but he did apologize “for calling a vast group of people evil.”