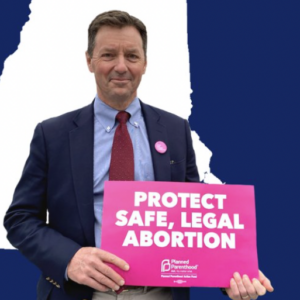 TURCOTTE: Democrats Are the Real ‘Extremists’

With crime out of control, inflation at decades-high levels, and our country flooded with illegal aliens, their failed policies leave them without anything positive to campaign on. So instead, they regurgitate the mantra handed down to them by their “leaders,” and double down on misleading, negative campaigns against their opponents.  But who are the truly ill-informed extremists?

I also ask the constituents a fourth question: how many of the state’s Democrat legislators voted to allow abortion without restriction up to the moment of birth? Answer: Every single one of them! That, citizens, is as extreme a position as it gets. However, it goes beyond that.  In 2021 when given the opportunity to pass legislation that would have required doctors to give medically necessary treatment to children who had been born alive, the New Hampshire House Democrats ran from the chambers in an attempt to keep the vote from happening by eliminating the necessary quorum.  The left in our state can wail about New Hampshire’s current law all it wants, but let’s make sure their grotesque view on abortion is clearly seen for what it is.

In Europe, the region our socialist Americans most frequently point to for guidance, restrictions on abortions occur much earlier in pregnancy. More than 20 European countries limit abortions to 12 weeks, and several more have outright bans. Only the United Kingdom mirrors New Hampshire’s current law of allowing abortions up to 24 weeks. No European country aligns with the Democrats’ view that abortion should be allowed up to the day of birth.

Our mid-term elections are just over a month away. As voters, we must all be informed on the issues and our candidates. Reject the soundbites, reject the “extremist” mantra of the far left, and above all, reject the Democrats who want to align New Hampshire’s abortion laws with the most repressive communist countries around our globe.