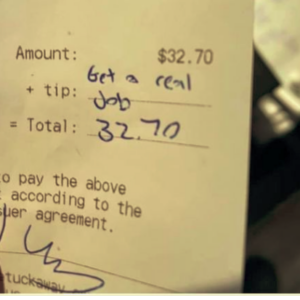 A receipt showing a customer at Tuckaway Tavern telling the bartender to “get a real job” in the tip line caused a social media stir when state Rep. Nicole Klein Knight, D-Manchester, shared it on Facebook and Twitter over the weekend. It quickly became a cause celebre on left-leaning social media.

The problem is the receipt was a joke, despite Knight Klien and other Democrats using it as proof of Republican malfeasance.

“This is a slip from a server in NH at the Tuckaway Tavern & Butchery. This is shameful and hurts small businesses and the communities they serve,” Klein Knight wrote. “Reminder the New Hampshire House Republicans voted to freeze the wage at $3.27 an hr. I challenge them to feed their family on that wage for one week.”

“To the low life who found this witty, funny, or in the least bit intelligent, I invite you back so I can sit and lecture you about how these “fake jobs” at our restaurant feed humans, feed communities + feed humanity as a whole in so many various ways… even low life forms like you…. Kindly go T$&K yourself…” Tuckaway’s Chef Bobby Marcotte said in a Facebook statement issued on July 31.

On Twitter, Klien Knight’s post was shared by other prominent Democrats like state Rep. Sherry Frost, the Strafford Democrat, who linked the joke receipt to Gov. Chris Sununu and State House Republicans. 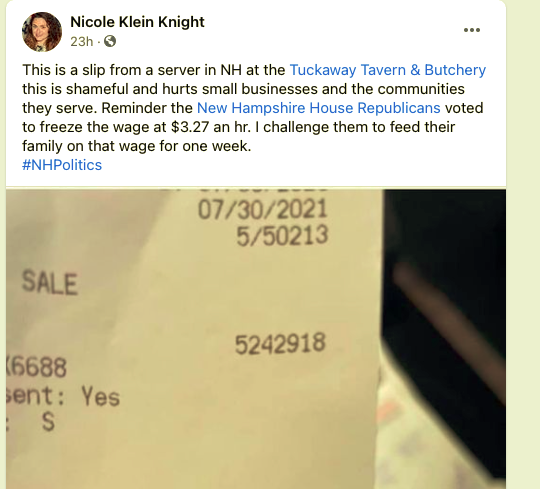 “And let’s remember that @GovChrisSununu and the NHGOP rammed through a bill that would exempt tipped wage earners from getting a bump if the federal wage ever gets raised, so there’s that,” Frost wrote on Twitter.

The photo of the receipt posted online is cropped and does not indicate if it is the merchant’s copy or the customer’s copy, which immediately raised questions about whether or not it was genuine. NHJournal called the Raymond-based Tuckaway Tavern on Monday to verify that the photo was true, but before the representatives called back, Preston Ferry at Tuckaway posted on social media that the whole thing was a joke.

In a follow-up Facebook post, the restaurant states a boyfriend of the bartender wrote the joke tip.

“This was not a ‘hoax’ or a ‘PR stunt’ or a ‘scam to get tips out of people’ as some ‘conspiracists’ have started to articulate + accuse us of but was an example of our raw emotions + protectiveness of our staff who works SO very hard day in + out to provide the best possible experience for our customers! Clearly our chef’s ‘protective dad’ came out when seeing this bartender’s post saying he was leaving Tuckaway ‘uninspired’ that night after seeing the tab telling him to ‘get a real job’….” the Facebook post states.

Both Klein Knight and Frost appear to have shared the receipt online before verifying its truth. In the hours since the post went viral, a Go Fund Me campaign started collecting tips for the server, and people started sending in tips via payment app Venmo. The Go Fund Me has since been taken down and the restaurant is promising all donors will get refunds.

Klien Knight has not responded to NH Journal’s questions about her posting, and her social media posts were still up Monday afternoon.

When tips are included, restaurant servers in New Hampshire average more than $18 an hour, according to the Restaurant and Lodging Association.

And in a state of 1.4 million people, just 2,500 people worked for the minimum wage in New Hampshire in 2019. Given the current labor shortage, that number is likely even smaller today.