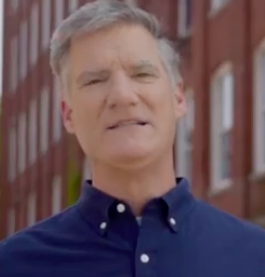 If you haven’t seen the new TV ad from Republican Andy Sanborn–the first in the GOP NH-01 primary race–here it is in 10 words or less:

“I will work with President Trump to secure our borders.”

What is the number one issue for voters in this election cycle? Where you stand on Trump.

What’s the number one issue among Trump supporters in the GOP? Immigration.

Sure, the NH state senator mentions a few other things like term limits and congressional perks, but it’s clear where is campaign thinks the action is.

Meanwhile, his opponent Eddie Edwards has the advantage of an “inner circle” endorsement from Trump’s White House– Rudy Giuliani–and Edwards talks tough on immigration, too–though he has a problematic record on the issue.

But if the GOP primary voters see this election as a choice between two Trump-supporting, tough-on-borders conservatives–ideologically equal, essentially–then the campaign will come down to other issues like resources and ground game.  And if, as it appears, the 11-way Democratic Primary is going to continue to draw most of the interest, it’s likely to pull more unaffiliated voters into their primary and away from the GOP’s. That will give the P-1’s–the repeat, core Republican primary voters–more influence on September 11th.

Given that Trump is polling around 90 percent among Republicans, look for both Edwards and Sanborn to go “Full Trump” by Election Day.