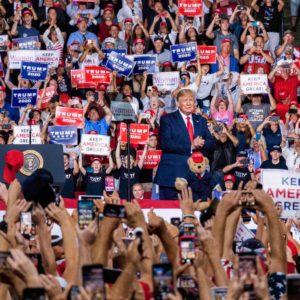 Trump at a campaign rally in Manchester, N.H. in August, 2019.
News

President Donald Trump is reportedly heading back to New Hampshire — the site of his first-ever election victory — and if the reports are true, it will happen the night before the First in the Nation primary. If so, it’s guaranteed to annoy his enemies. But will it help his friends?  The timing has some wondering what the president’s strategy is.

Between February 4 and 12, New Hampshire will be the center of America’s political universe. The week leading up to the First in the Nation primary is always a political circus thanks to the flood of candidates, activists, attention-seekers and media from around the globe pouring into the small state.

Now, add the security surrounding a presidential visit and crowds coming to a raucous campaign rally on the eve of the Democrats’ vote — most likely in the heart of Manchester — and “chaos” sounds about right. But can even Trump’s celebrity power outshine the first primary of the 2020 presidential season?

And it’s not like Trump is coming to friendly territory. While he drew a record crowd of dedicated fans to Southern New Hampshire University’s arena in August, the president’s polling has been lackluster at best.

As Morning Consult reports in their monthly tracking poll, “as has been the case in recent months, Trump’s worst showing in battleground states was in New Hampshire, where 39 percent approve of his job performance and 58 percent disapprove.” Trump hasn’t broken the 42 percent approval mark here since 2018.

Will the visit help local Republicans? New Hampshire Democrats have been tirelessly working to link GOP Gov. Chris Sununu to Trump in hopes of cutting into the incumbent governor’s popularity. Thus far, it hasn’t worked. The Morning Consult’s latest survey finds Sununu is the fifth most popular governor in the country.

One downside for early-primary states like New Hampshire is that, when there’s an incumbent in the White House, the other party’s primary fight fills the media with negative ads and attacks. Trump’s already taking a pounding on the stump. Why not show up and fight back — an idea Trump would relish.

“Donald Trump has delivered on the promises he made to the American people during the 2016 campaign,” he told NHJournal. “The economy is booming, he has renegotiated bad trade deals, rebuilt our military and is building the wall to stop illegal immigration. Because of these factors and more, Donald Trump will be re-elected President in November by a wider margin of the Electoral College than he won in 2016.”

New Hampshire state GOP chairman Steve Stepanek is even more excited. “If he comes, he’s going to bring 20,000 die-hard supporters into downtown Manchester, shut down half of Elm Street and drive Democrats absolutely crazy,” he told NHJournal. “The media’s going to be covering him instead of their failing campaigns.”