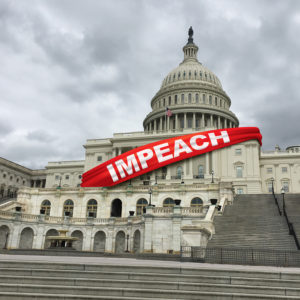 House Democrats plan to introduce an article of impeachment against President Trump on Monday, multiple media sources report. If it happens, the effort to remove Trump from office will once again have the support of both House members from New Hampshire.

“More than 150 House Democrats, well over half of the caucus, have signed on to the article of impeachment written by Reps. David Cicilline of Rhode Island, Ted Lieu of California and Jamie Raskin of Maryland that focuses on the breach of the Capitol complex and accuses the president of inciting an insurrection,” according to the Wall Street Journal.

“Donald Trump needs to be removed from office, and we are going to proceed with every tool that we have to make sure that that happens to protect our democracy,” Clark said.

The calls for impeachment, or possibly invoking the 25th Amendment of the U.S. Constitution to remove Trump from power, are in response to his behavior on Wednesday when a mob of his supporters ransacked the U.S. Capitol. Trump is accused of inciting the violence with a speech earlier in the day and allegations he delayed efforts to send in the National Guard.

New Hampshire’s two House Representatives, Annie Kuster and Chris Pappas, have said they will both support the measure in the House. “This President should not serve one more day in office,” Pappas said in a Thursday statement.

“As long as President Trump is in the Oval Office, the people of this country — and our very democracy — are at risk. This man demonstrates a clear inability to discharge the duties of his office and he should be removed immediately,” Kuster said in her statement.

If articles of impeachment are sent to the United States Senate for a trial, a two-thirds majority vote will be required for the conviction and removal of the president. Following the two Georgia run-off elections on Tuesday, the Senate will soon be evenly split 50-50 between the two parties. It will take 17 Republicans to join their Democrat colleagues to take the historic step of removing a sitting president. Republican Senators in blue or swing states will face intense pressure to remove Trump.

“For the sake of the country, [President Trump] should be removed as quickly as possible or resign,” New Hampshire Senator Maggie Hassan (D) said during a Thursday press call.

Senior Sen. Jeanne Shaheen agrees. “[President] Donald Trump is unfit for office. I believed that last year when I voted for impeachment, and I believe it now,” she said in a tweet.

At least one Republican, Sen. Ben Sasse of Nebraska, says he’s open to removing Trump from office. “I would definitely consider whatever articles [the House] might move,” he said on CBS on Friday, “because as I’ve told you, I believe the president has disregarded his oath of office. What he did was wicked.”

Some fear pushing to remove Trump may inspire more backlash by angry supporters of the president. “If Speaker Pelosi pushes impeachment in the last days of the Trump presidency it will do more harm than good,” said Sen. Lindsey Graham (R-S.C.) “I’m hopeful President-elect Biden sees the damage that would be done from such action.”

Observers note that this unprecedented move may have the opposite reaction from its intention, telling NHJournal that the violence seen on Wednesday may only escalate – further radicalizing the hard-core Trump base. With only a week and a half to go, those observers say the prudent move is simply to run out the clock.

Two of the three Republican governors in New England, Charlie Baker of Massachusetts and Phil Scott in Vermont, have called for Trump to leave office. The third, NH Gov. Chris Sununu, has not.