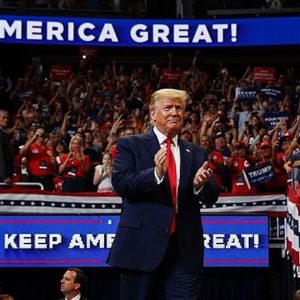 President Trump is bringing his “Make American Great Again” campaign to Portsmouth this coming Saturday, bolstering a close adviser’s claim that “Dollar for dollar, New Hampshire is the best investment the campaign can make.” It will be Trump’s fourth visit to New Hampshire since taking office, and his second this year alone.

The rally is scheduled for 8:00 p.m. (EDT) at the Portsmouth International Airport.

“President Trump’s record-setting accomplishments in record-setting time have improved the lives of all Americans. He rebuilt, restored and renewed our great nation once, and he’ll do it again,” Hogan Gidley, Trump 2020 national press secretary, said in a statement. “We look forward to so many freedom-loving patriots coming to the rally and celebrating America, the greatest country in the history of the world.”

And in a shift from previous Trump statements, the campaign is both providing face masks to attendees and “strongly encouraging” their wear. Before his rally in Tulsa last month, Trump had notably refused to endorse the use of face masks. “I recommend people do what they want,” he said.

President Trump was widely criticized for an indoor rally in Tulsa, Oklahoma, two weeks ago where masks were relatively rare among attendees. Rather than urging attendees to wear masks, the president said: “I recommend people do what they want.”

The invite to Saturday’s event included a disclaimer: “In attending the event, you and any guests voluntarily assume all risks related to exposure to COVID-19, and waive, release, and discharge Donald J. Trump for President, Inc.; Portsmouth International Airport at Pease; or any of their affiliates, directors, officers, employees, agents, contractors, or volunteers from any and all liability under any theory, whether in negligence or otherwise, for any illness or injury.”

Still, New Hampshire Trump supporters are excited for the visit and what it says about the president’s commitment to Granite State Republicans.

“This visit shows how important New Hampshire is to President Trump,” state Trump 2020 co-chair Rep. Fred Doucette told NHJournal. “It also shows his commitment to the GOP ticket in our state. He’s endorsed Corky Messner for U.S. Senate and he’s endorsed Matt Mowers for Congress. Now he’s coming here to back it up.”

New Hampshire GOP politics has been roiled by the president’s decision to endorse in the NHGOP primaries, a move some Republicans say undermines the state party’s autonomy and, as a result, hinders its ability to defend the First In The Nation primary.

Trump supporters say the president got involved because the state’s primary elections are so late — September 8 — that they don’t allow enough time to mount a serious campaign against an entrenched incumbent like Sen. Jeanne Shaheen (D).

“Not only can we deliver four Electoral College votes, but we can win a congressional seat and we can win a U.S. Senate seat with Donald Trump carrying this ticket,” Trump confidante Corey Lewandowski said at last week’s opening of the Trump campaign office in Manchester. “Dollar for dollar, New Hampshire is the best investment the campaign can make.”

New Hampshire Democrats wasted no time using the announcement to wrap state Republicans in the Trump mantle, an obvious strategy in a state where the president consistently polls 10 points underwater.

“Trump’s response to the COVID-19 crisis has been chaotic and woefully inadequate, resulting in thousands of Granite Staters contracting the virus and hundreds of lives lost, while causing significant damage to our state’s economy. Instead of helping our state safely recover, Trump is flying in for a political rally that will only further highlight the chaos he has caused,” N.H. Democratic Party chair Ray Buckley said in a statement to NHJournal.

“Republicans from Corky Messner, Don Bolduc, and Chris Sununu will stand with Trump at this rally, as they have on all major issues affecting our state, and it’s clear they are loyal only to him, not New Hampshire,” Buckley said. “In November, New Hampshire voters will reject them and vote Trump out because of his broken promises and failure to lead during this pandemic.”

It’s a view shared by Neil Levesque, executive. director of the New Hampshire Institute of Politics at St. Anselm College.

“It’s a smart strategy for the President to appear in as many toss-up states as possible between now and November,” he told NHJournal. “Will it be the easiest state in the toss-up category to win? No, but there is plenty of time between now and the election for the campaign to spend time in any state that is a possible win.

“The president does well when he is out on the stump and communicating directly to voters so I’m not surprised they picked the Granite state for this visit,” Levesque said.

People who can’t attend can watch the rally online at www.donaldjtrump.com/online.