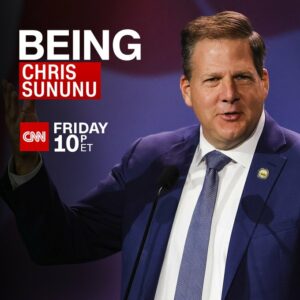 New Hampshire Gov. Chris Sununu was the star of the show on CNN Friday night, featured in an hour-long program called “Being…Chris Sununu from CNN’s Dana Bash.” It was the latest long-form national media profile for the four-term Granite State governor. Not surprisingly, it is feeding speculation Sununu might enter the 2024 GOP presidential primary.

CNN’s Bash repeatedly came back to the subject during the show. And Sununu gave his oft-repeated answer: Not jumping in, not ruling it out.

“Look, folks have talked to me about it, that’s obvious and clear,” Sununu said. “And I think as things start gearing up into ’23, more folks will be talking about it. My focus right now is New Hampshire. It really is. Because it has to be and I want it to be.”

Sununu added that he has “been asked to travel a lot” and if he does, he plans to talk about his success here at home.

“Maybe I’ll go to another state and work with a team in another state. I think what we’ve been able to do here is very similar to what Americans would love to see in their own state.”

CNN’s feature on Sununu got the notice of GOP activists both in New Hampshire and nationwide.

“This is about buzz,” one GOP operative said after the program aired. “It’s not just the people who watch the show, it’s the clips that get passed around, and the people who hear about it — especially in the donor and chattering classes.”

Sununu, who represents one of the smallest states in the union located in the bluest corner of the country, is hardly a household name in national politics. In a poll of Republican primary voters released last week, former President Donald Trump and Gov. Ron DeSantis (R-Fla.) dominated the approval ratings and name ID. Sununu, like Arkansas Gov. Asa Hutchinson and Texas Rep. Dan Crenshaw, failed to register.

“Gov. Sununu looked every bit presidential. Every time he’s able to speak to a broader audience about his successes as a governor, like cutting taxes and making government more effective — as well as his experience as a small business owner — it demonstrates to potential donors and voters that there are other options to lead the Republican Party. And the country,” Stevens said.

“Gov. Sununu’s affability and desire to expand our party is a real breath of fresh air that will be well-received by people who are looking to get past the years of tiresome acrimony and cynicism – and towards a vision of hope and opportunity.”

And Sununu clearly wanted people to see it. The governor’s office sent out a press release touting it in advance, and he promoted it on his Twitter feed as well.

Among the other highlights from the CNN program:

Trump’s time has passed: “He is not the influence he thinks he is… He’s announcing he’s running for president at his most politically weak point. He’s doing it from a point of weakness, from a point of whatever his own agenda is. But it’s kind of just a blip on the radar. There’s an argument to be made he’s not even the frontrunner, right?”

Sununu blamed “bad candidates” for the GOP’s poor performance in the 2022 midterms: “We did not have the right candidates that came out of a lot of our primaries, and I think they lost sense of the priorities of the Republican Party, of the independent voter, just the extremism, the election denial, all of that stuff.

“When you look at the polls, when you look at what’s important to folks, there’s no doubt inflation and costs and energy are the number one concern of the voters, but what no poll ever asks you is your top issue extremism and fear of getting nothing done. That actually was the top issue for a lot of folks.”

Sununu relies on a former governor for advice. His dad: “[John H. Sununu] was a really great governor and he has a great reputation, a very, very smart guy. I do lean on him sometimes. I’ll call on him and I’ll ask him for a piece of advice. Now, the trick is you’ve got his advice and you say, ‘Wow, that was probably brilliant back in 1988.’ So, how do I craft that into a more 2022-style message or policy?”

And how did Sununu think it went?