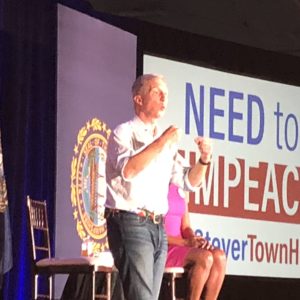 Tom Steyer wants you to know that he is not an extremist.

He demands that President Trump be impeached immediately;  believes Judge Brett Kavanaugh’s appointment to the Supreme Court is part of a plan for Trump to evade prosecution; supports free college and healthcare for all; He says “there has been a hostile corporate takeover of our country,” and that our democracy is at an end.

But he’s not an extremist.

“Since when is standing up for the rights of citizens ‘progressive’ or ‘extreme?” Steyer asked a crowd of 200 or so people in Bow, N.H. Wednesday night. “It’s not extreme. It’s American!”

Billionaire liberal Tom Steyer and his group Next Generation have made New Hampshire one of 10 states they are targeting in the 2018 midterm elections, which is why he brought his #SteyerTownHall road show to the suburbs of Concord.  Steyer has talked about spending some $1 million to influence New Hampshire’s elections, particularly in the contested First Congressional District race, in order to promote his issues. Which—based on the conversation at Fieldhouse Sports Wednesday night–are (in no particular order):

Steyer says the evidence of Trump’s criminal behavior is blatant, obvious and indisputable. He claims Trump is guilty of violating the emoluments clause of the Constitution by running businesses like hotels and golf courses that take money from foreign governments. Steyer said Trump was also clearly guilty of obstruction of justice for firing former FBI Director Jim Comey. (No mention of the independent Inspector General’s report that found multiple examples of improper behavior by Comey).

“We need to impeach President Trump for the sake of the rule of law,” Steyer said. “It’s not politics.”

Steyer was annoyed by suggestions from prominent Democrats and pundits that pushing for Trump’s impeachment was politically counter-productive. 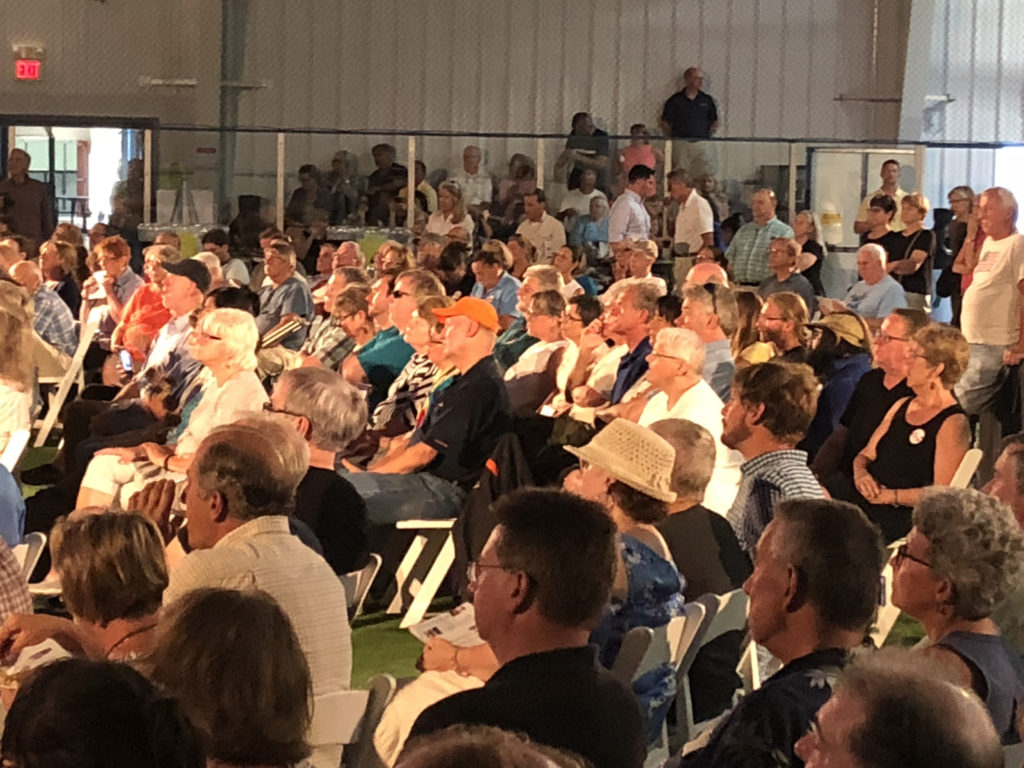 A friendly crowd listens to Tom Steyer speak at his town hall event in Bow, NH on Wednesday July 11th.

Despite Steyer’s claims that his Next Generation organization was making real progress with young people, the crowd was mostly made up of the “Matlock and Metamucil” demographic. They asked questions about current events like President Trump’s pick of Brett Kavanaugh to the Supreme Court. Steyer, who comes across on stage like a cross between Steve Jobs and Mr. Rogers, was happy to comment.

He called Judge Kavanaugh “the perfect stooge,” and repeated the now-debunked canard that the Judge believes Presidents can’t be prosecuted or deposed while in office—thus giving President Trump a “Get Out Of Jail Free” card.

“Trump nominated someone to the Supreme Court who he knew would push to hide hi from criminal prosecution and civil lawsuits,” Steyer said of Kavanaugh. “We’re seeing something really wrong here.”

When asked about the current trade kerfuffle between America, Europe and China, Steyer launched a personal attack on President Trump.

“Everyone’s focused on the fact that he’s lawless and reckless and dangerous, but I want to point out another thing: He’s dumb,” Steyer said to raucous applause. “People keep saying he’s a good negotiator because he keeps telling them he’s a good negotiator. He’s not. He hasn’t gotten one negotiation right.   This is a guy who’s’ a dummy.”

This inspired a response by a member of the audience, Brandon from Concord, who bemoaned the current “tribalism” in American politics and complained that the way Steyer was talking about President Trump and Judge Kavanaugh made things worse. “You’re pushing people on the fence away from what you and I are trying to do.”

Steyer would have none of it.

“Do I want to get to a place,  which I would say is the traditional American place, of telling the truth? Of put the country first? Of Agreeing to disagree as long as we both put do those two things. Absolutely,” Steyer said. “But that’s not happening.”

“I’m tired of the false equivalency, that ‘both parties are extreme.’ That’s not true,” Steyer said. “The [Republicans] have gone off the rails. They’re extreme, not us.”

Steyer hasn’t always had Election Day success. In 2014, for example, he spent $74 million trying to make climate change a core issue. Instead, the GOP took the U.S. Senate.  And his complaints about “Trump meeting alone with Putin” are ironic given his problematic past with the former Soviet Union. As InsideSources.com reported:

Critics of Steyer do not go so far as to make accusations of nefarious goals, but they actively take note of Steyer’s close connections to Russia, a settlement he reached with the U.S. government over questionable Russian investments, and the profits he’s earned from ties to Putin’s inner circle.

However, for New Hampshire politicos who doubt the impact that Steyer and his millions can have on local races, Steyer claimed Wednesday night that the NextGen-inspired 2016 increase in turnout among college students at UNH alone was larger than the margin Maggie Hassan had over incumbent US Senator Kelly Ayotte.  Steyer said he has NextGen organizations on every college campus in the Granite State.

Despite the lack of a youth presence at Wednesday night’s events, Steyer said that he had actually cracked the code for getting college students to vote: Puppies.

“You know what works? Puppies at the polls. It turns out that if you bring puppies to the polls, young people will show up, and then they will vote.”

Election outcomes swayed by kids who come to the polls just to pet a cocker spaniel? Not particularly extreme. But in its own way—extremely terrifying. 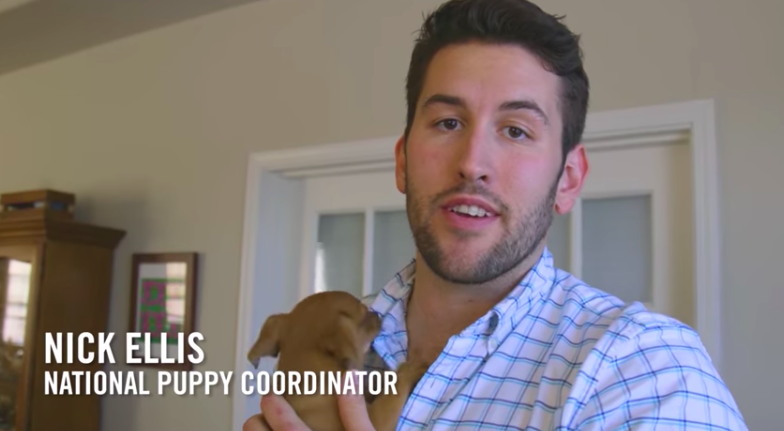