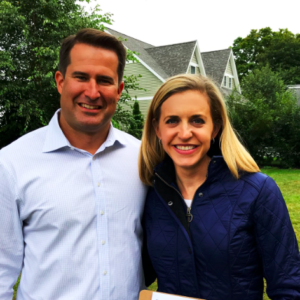 Today’s N.H. Primary Is the First Vote in the 2020 Presidential Race

The name on the ballot may read “Molly Kelly” but when Granite Staters vote today, the entire New Hampshire Democratic establishment will be on ticket.

Talk to New Hampshire Democrats—off the record—about today’s primary election and they are quick to point out that there far more people with skin in this game than there are names on the ballots.  “If Steve Marchand wins, it’s a real sign that the Establishment that backed Hillary Clinton has lost control of the party,” one Democratic campaign activist told NHJournal.  On the other hand, another noted: “If Chris Pappas wins going away, what does that say about Bernie Sanders and the so-called ‘Resist’ revolution?”

While the political coalitions aren’t as clearly defined as those two comments might suggest, there is a big-picture story being told in New Hampshire on Tuesday. Both of the high-profile Democratic primaries— for governor, and in the First Congressional District—feature establishment candidates with the public endorsements of the party’s top officials, opposed by challengers running from their left and advancing what might be called the ‘Bernie Sanders’ agenda.

The best example is the battle for governor between former state senator Molly Kelly and former Portsmouth mayor Steve Marchand.  Kelly has the endorsement of both US Senators, Jeanne Shaheen and Maggie Hassan, and Democratic Rep. Annie Kuster—along with the teachers unions, Planned Parenthood and a long list of legislators and other prominent Democratic players.

Marchand has virtually no high-profile endorsements and has instead run a campaign based on far-left progressivism, attempting to tap into the passions that gave Democrats like Alexandria Ocasio-Cortez, Ayanna Pressley and Andrew Gillum surprise victories in primaries across the country.

As of Monday night, political insiders on both sides of the aisle told NHJournal that, despite having the financial advantage and the “Year of the Woman” trends on her side, the race was too close to call.  “Marchand shouldn’t even be in this race,” a longtime Democrat told NHJournal. “But I think he’s outworked and out-hustled [Molly Kelly] and he’s really connecting.”

Not everyone agrees. A member of Clinton’s 2016 team told NHJournal: “This Governor’s primary reminds me of the Maggie v. Jackie [Cilley] race in 2012. It felt like Jackie had the fight and passion, but Maggie’s team ran a professional campaign and, in the end, that’s what mattered.”

But if Marchand does pull off the upset, what does that say about the New Hampshire Democratic Party leadership? They’ve pulled out all the stops to push Molly Kelly over the top, even more than the establishment did for Hillary Clinton in 2016. The former First Lady had the backing of Sen. Shaheen and most of the top Granite State Democrats….and couldn’t break 40 percent in a primary.

Then there’s the flip side of this story in NH-01:  Uber-establishment Chris Pappas appears on the verge of a solid victory in an 11-way race. He has the endorsement of every prominent New Hampshire Democrat (except outgoing Congresswoman Carol Shea-Porter, who is backing her chief of staff Naomi Andrews) and a reputation as a moderate, non-confrontational Democrat.

If you were looking for the centrist bookend to Ocasio-Cortez in the Democratic Party of 2018, Pappas is your guy.  How to square his seeming success in this #Resist moment?

For one thing, the progressive vote is being split multiple ways.  Angry, anti-Trump, pro-#MedicareForAll progressives have at least a half-dozen candidates to choose from, including Sen. Sanders’ son, Levi—though his campaign hasn’t shown any real movement. Several Democrats speculated to NHJournal that in a two-way race with a quality progressive candidate, Pappas might be in trouble.

Instead, Pappas is fortunate enough to have Maura Sullivan as his most high-profile competition. On paper, Sullivan is a strong candidate. As Sullivan booster Seth Moulton (D-MA) put it over the weekend: “She’s a veteran in the year of the veteran. She’s a woman in the year of the woman.” Sullivan has raised around $2 million, three times Pappas’ take, and she’s had the backing of Obama administration officials like former HHS Secretary Kathleen Sebelius and former Navy Secretary Ray Mabus.  She’s flooded the airwaves with TV ads and explicitly targeted President Trump—including a ad with the tag “Let’s Make America ‘America’ Again.”

If Sullivan wins, it will be a triumph of national politics and outside money over the New Hampshire establishment and a Granite State tradition of favoring local connections and experience. “Pappas isn’t “establishment.” He’s “community,” one Democratic operative told NHJournal. “ It will also be a signal to potential 2020 candidates that money and message can beat the party establishment, even with a flawed candidate like Sullivan.

If, on the other hand,  Molly Kelly and Chris Pappas win, that will be a good night for the Democratic establishment and a message to would-be 2020 candidates that the Sanders win of 2016 was a fluke.  The 2020 race will start in Concord, not among the grassroots.